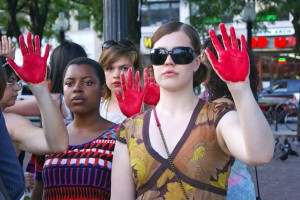 More often than not, public performance art is a confusion. The term itself is a necessary muddle, a combination of “public art,” which seems to imply an art for the uninitiated, in contrast to that “private art” that gets displayed at galleries and museums, and “performance art,” that vague category of art that could be reasonably stretched to include everything from Andy Warhol’s “Exploding Plastic Inevitable” to the street performance of a man painted silver and disguised as a statue—at which point the better label might be “outsider public performance art” or, alternatively, “busking.”But while works of public performance art often result in little more than a confused look and a “what is this?”, for Todd Frugia, creating that sort of confusion is the goal. Todd and his wife Marrakesh, who create and produce art under the name Rooms, opened the “Out of Site” public performance series on a recent Friday with “Labor Keeps the Heart,” a twenty-four-person ode to labor and pigeons. Dressed in plainclothes and with no other unifying trait than their red-painted left hands, the group dispersed and came together, again and again, in the center of West Town’s Polonia Triangle. Once there, red hands raised, a high-toned call would go out, growing over the course of a few seconds until voices faded away and only a high-toned “ooh” was left ringing. Just after the last voice stopped singing, the group would fracture again, splitting off into a number of smaller pods that walked back where they came from, red-hands raised, until they reached a corner of the intersection—and then walked back to the small, triangular park once again, to sing, disperse, return and repeat for the next two hours.

It was never clear exactly what “Labor Keeps the Heart” was supposed to “mean,” though then again that was never the point. The piece took its title from the Nelson Algren quote that rings the Triangle’s central fountain—“For the masses who do the city’s labor also keep the city’s heart”—and the Frugias were interested in the idea of the laboring masses being dressed in something other than overalls and hardhats. “When I’m on the train, or when I’m at work, that’s not what life is about. Life is about what they look like,” says Todd, pointing out at the group as they gathered again by the fountain. “‘Labor keeps the city’s heart,’ and the coming back out and coming in sort of resembles the heartbeat, that it’s systolic, diastolic, pumping back and forth.”

Were it not for Carron Little, “Out of Site”‘s co-founder and organizer, the labor coming out of the Division Street Blue Line stop at the park’s southern end might have asked, as Todd Frugia hoped with a laugh, “‘Is this some sort of gathering? Is this a cult? What is this?'” Little, the director of Eyeporium Gallery in Wicker Park and an artist herself, was on hand to see the first performance of this year’s “Out of Site” season and get the word out about the weekly performance event.

Now in its second year, the series aims at surprising people in the community with a public art project every Friday evening, from late summer through early autumn. Through funding from the Wicker Park Bucktown Chamber of Commerce, Little and co-founder Whitney Tassie have been able to fund a dozen jury-selected performances from groups including Chicago’s Happy Collaborationists and 3 Card Molly. Last year, artist Joseph Ravens ran barefoot and shirtless while carrying an enormous dead fish, moving it in his arms to pretend it was still alive. The piece was called “Fish Out of Water.”

“When Joseph ran around the neighborhood with a fish that day,” said Little, “a lot of people—well, because there had been a suicide on the rail track, the streets were filled with people. And actually someone sent him a message through Craigslist thanking him for bringing a bit of light to a horrific moment.” At another performance, “this one guy just said to me, ‘My god, thank you for making me stop and really wonder and think about my life.’ And I think that is the power of performance art, you know when it actually kind of, well that’s the point of art, is to make people think about their lives.”

Little has lofty hopes for the project, though it can be hard to see exactly how the sight of a man carrying a dead fish, or a crowd making bird noises in the center of a busy intersection, can change lives. It can be frustrating, as Todd Frugia acknowledges, to see such a performance and hear it referred to as “art.” But, says Todd, “even if it frustrates you, even if you go, ‘What the fuck was that?’, that’s at least something. People are just so, they just wanna… really make sense and understand things. Sometimes you just want to be like, ‘You just saw a group of people raise their hand and make a yelp, so you be the judge.’ ”

“Out of Site” presents performance events every Friday through October 12, 5pm-7pm, in Wicker Park and Bucktown. The next performance, on Friday August 10, will feature Mothergirl. Locations vary; see outofsitechicago.com for more information.