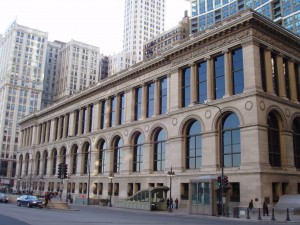 “Where do you want to see culture in Chicago by 2030?” This was the vague question asked during the first Chicago Cultural Plan town hall meeting in February at Columbia College. Months later, and many meetings later, the Canadian company in charge of creating the Chicago Cultural Plan (no irony there), Lord Cultural Resources, revealed the draft of the plan in July.

And what’s not to like about the plan? As Daniel Burnham famously and supposedly said, “Make no little plans,” and the draft of the Chicago Cultural Plan takes that to heart. It’s so chock-full of great ideas and priorities for the city one half expects to see “A chicken in every pot” listed matter-of-factly. Some ideas the draft puts forth include: “Optimize city policies and regulation so creative initiatives thrive,” “Artists-in-residence in every Ward,” and “Arts education as a core subject within Chicago Public Schools (CPS).” These are good ideas, I mean, only a Tea Party member could hate them!

But like so many political dreams they’re short on specifics. On July 31, Mayor Rahm Emanuel revealed Chicago’s preliminary budget for 2013—which begins in the red by a whopping $369 million. As much as the art community wants the Cultural Plan initiatives to work, and as much as I personally want them to, this is not the kind of budget that will support millions of dollars in new expenditures like “Large-scale major cultural festival that attracts global attention and highlights Chicago’s renowned cultural assets.”

So where do the “grants” and “dedicated funding” come from to fund these projects, especially in a sluggish national economy and a debt-saddled local economy? Those answers come in Recommendation 22: “Develop new revenue streams for culture,” which lists a paltry five solutions to fuel the myriad initiatives in the rest of the draft. Five ideas. One of which is the politically toxic idea, “Dedicated tax for arts and culture.” There are so many good ideas in the plan, but so little money in the city’s budget, that in reviewing the Cultural Plan one does not know what will realistically be produced from this plan. But hey, if we’re dreaming, I mean, planning for the future, go Burnham-style and go big.

When it comes to visual arts, the city and the community would best and most immediately be served to strengthen what it already has in place and leave ideas like creating an “Online artist marketplace to exhibit and sell art” to businesses that, ahem, already exist. Chicago desperately needs to strengthen and make transparent what’s happening at the Department of Cultural Affairs and Special Events (DCASE), and that’s part of the short Recommendation 23 D: “DCASE strategic plan,” which somewhat unnervingly implies there isn’t one right now.

As Bert Stabler detailed in his Newcity article from January of this year, “The Future of Cultural Affairs,” there are many questions that still dog this department, and the City has not been transparent about the changes going on behind the scenes. This department was damaged by former Mayor Daley as he was outgoing and has been in disarray under the new administration. Employees have been bounced between organizations, being hired and fired, for reasons that not even they may know and the public certainly does not. Witness veteran curator Lanny Silverman, who was fired earlier in the year, but recently rehired. This kind of instability does not foster stability or coherence, nor does it project the appearance of an organization that will put Chicago artists into an international context.

Ironically, Mayor Emanuel could soon claim victory on some of these initiatives even though they have been accomplished by other goals or infrastructure that is already in place. After all, DCASE already exists, it just needs to be put in order. Emanuel has been negotiating with the Chicago Teachers Union over their contract and recently rehired 477 teachers for the Chicago Public Schools for art, music and physical education at a cost of $50 million, more money that will magically manifest—the Mayor has refused to say where this money will come from. It would be politically foolish not to extract every positive possible from that deal, so presto! as part of his maneuvering with the teacher’s union he has also fulfilled a cultural plan goal.

There are many great ideas in the Cultural Plan draft, but let’s focus on ones we can get done and leave the rest for the time when $2 gas returns.

I have been watching of late with dismay as elected officials in Chicago have played a shell game with the arts funding/personnel of the (former) Department of Cultural affairs. Each time the “shell” is lifted the “pea” underneath gets smaller! When I first came to Chicago I was impressed with the robust support of the city government for the visual arts and city artists. There were (and are) pop-up galleries, a comprehensive Chicago Artists Resource website, numerous galleries and non-profit spaces and many and various public art projects. Compared to other cities where I have shown my work (NYC, Detroit)… Read more »