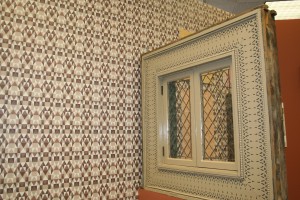 In this lavish, elegant and expertly curated exhibit, we get a chance to see Frank Lloyd Wright’s architecture whole as we go from one alcove to the next, each replete with photographs and drawings of, and artifacts from, a different one of his famous and more neglected buildings. Wright’s houses and public buildings, with which we have become familiar, are on view here, but we are also treated to his attempts at creating “affordable” housing for the working class that incorporated touches that raised the structures above the drab tenement. Francisco Terrace at 253-7 North Francisco (1895), shown in four vintage black-and-white shots, provided a separate outside doorway for each apartment and had varied patterns in the brick façade—all at minimum cost to the developer.  Although the complex is not opulent, Wright was able to introduce into its design some of the complex planes that were his hallmark. That elegance takes on pathos in a shot of a poor young boy hunched against a light pole in the shadowed courtyard as the intriguing forms of the apartments rise above him, gleaming in the sun. (Michael Weinstein)