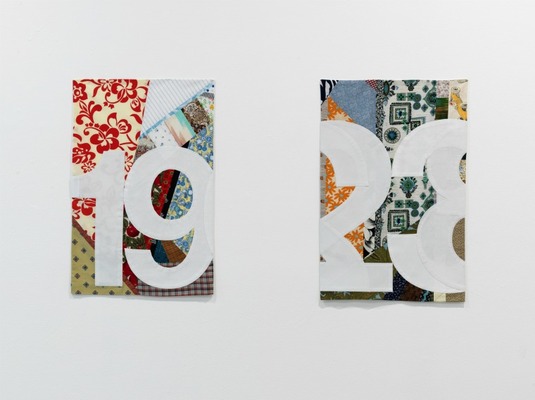 Comprising works from over fifteen years, Karen Reimer’s solo exhibition “Endless Set” locates the artist’s work squarely between the intimacy of craft and the more impersonal systems of production. The exhibition’s breadth allows for subtle dichotomies to arise: in Reimer’s poetically redacted newspapers, we find her working text and subtext; in her meticulously rendered textbook pages, we cut between function and decoration; and in her most recent body of work (from which the exhibition takes its name), we see Reimer’s exhaustive exploration of systematic production and formal obliteration.

“Endless Set #1399” occupies the main space of Gallery 400, in which a single stack of pillowcases rests on a wooden platform. Onto each pillowcase has been stitched what appear to be overlapping number forms, and these forms are repeated in light pencil at full scale over the gridded interior walls of the space. Around the corner, we find several more pillowcases and learn the origin of the work. Each pillowcase has been dedicated to one of the (endless) set of prime numbers. For each number, a pillowcase is surfaced with that number of smaller fabric pieces, and features the number itself, as tall in inches as that number, itself appliquéd on top. When the number is larger than the pillowcase itself, the form is folded until it fits completely. The room features the beginning of the set, allowing viewers to watch as the patterns are quickly overwhelmed and obliterated by larger numbers that eventually cover the surface completely. The number 1399, chunked and abstracted to fit the scale, fills the main space itself.

In the context of such varied work from Reimer’s career, “Endless Set” reads like a marked rejection of compositional art and a turn toward less aesthetically oriented conceptual art. Pairing “the traditionally feminine and domestic practice of craft” (as one gallery didactic suggests) with the—masculine? natural? inhuman?—concept of mathematical systems, the result is an almost Sisyphistic demonstration of production divorced from demand. It is a tricky shift, but the rub is worth it: especially with the earlier works on site, “Endless Set” provides an intriguing survey of Reimer’s craft as a conceptual practice. (Steve Ruiz)