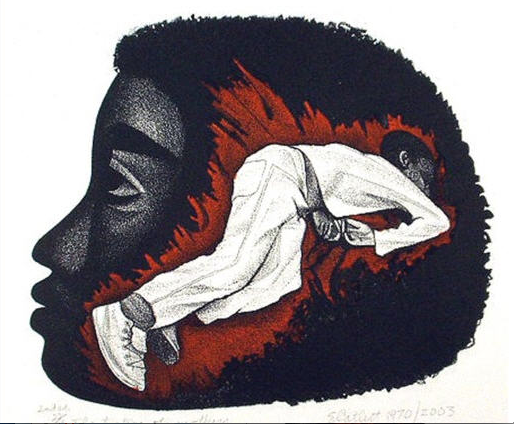 Elizabeth Catlett, “The Torture of Mothers,” 1970

Like an iceberg in the ocean, most of the art in any art museum is off-view, so an exhibition with a theme no more profound than “Buried Treasures” is always timely. Thirty art museums with African-American collections were asked to propose items for this exhibition, from which fifty artworks were chosen. Even for a non-specialist like myself, most of the artists are familiar, and some of them have several works on display. But there really are some treasures, and overall there is quite a variety. Unlike the Elizabeth Catlett, Jacob Lawrence and Romare Bearden artworks, most of it would not be easily identifiable as African American in style as well as theme, and the examples of  Romantic nineteenth-century landscapes, contemporary ceramics and fabric art appeared to be neither.

Charles Clarence Dawson (1889-1981) was a brilliant Chicago commercial illustrator who worked in the typically sharp, clear narrative style of his day. Here he is represented by a delightfully ironic depiction of two African-American laborers covering an outdoor billboard with a monumentally jovial Euro-American Santa Claus. One of the earliest African-American graduates from the School of the Art Institute of Chicago, William Edouard Scott (1884-1964) also worked in the straightforward pictorial style of his time, applying it here to African-American heroes of science and education. And there’s a surprisingly intense, small study that Henry Ossawa Tanner (1859-1937) did for his melodramatic “The Thankful Poor.” Self-taught artists are well-represented by missionary Mary L. Proctor, whose lighthearted connection of a commercial sweetener with civil rights in “Equal 2000” contrasts with the ominous work of  Chicago sculptor Marion Perkins, who has carved three stone faces gazing skyward in “Hiroshima.”

The African-American experience is an inviting subject for a variety of provocative exhibitions, but this is not one of them. This is an exhibition of very good paintings, prints and sculpture that happen to be made by African-American artists. (Chris Miller)

Through December 31 at the DuSable Museum of African American History, 740 East 56th Place.