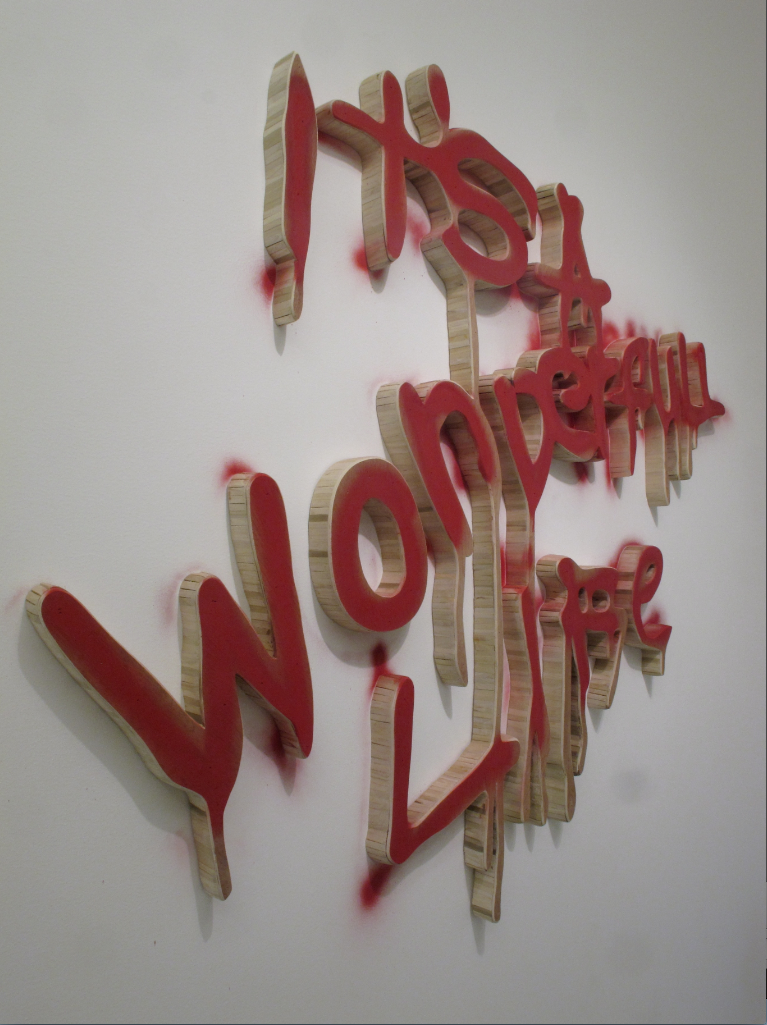 An imposing wooden structure, anthropomorphic and frozen in petrified animation, commands Michael Rea’s second solo exhibition at Ebersmoore—titled “The Last Catholic”—in a fashion recognizably his own. Rea’s desire is to understand desires—whether personal or collective, announced or subconscious—and their reinforcement within popular culture. The source material for the artist’s monstrous fabrications is most frequently cinematic. In a work from his 2010 exhibition at Ebersmoore, Rea employed the 1981 comedy film “Stripes” in order to drop a cynical axe onto tropes of the young heterosexual male: infatuations with weapons, recreational substance abuse, and the opposite sex. A concern emerges in this work that is extended and refined within “The Last Catholic”—an interest not only in desires, but in those delinquent desires that fall short of being healthy, that manage to infiltrate our psyche and must be somehow expelled. “The Last Catholic” bares the palpable tension that arises when one confronts an uninvited desire for the undesirable. Recall an iconic filmic sequence in which an archeologist-cum-priest excavates a Roman Catholic medallion alongside a stone rendering of the Assyrian/Babylonian demon Pazuzu, recognizing that he must combat the demon that he will inevitably exorcise from a twelve-year-old girl. It is the eventual internalization of this demon that is crucial to the narrative of William Peter Blatty’s “The Exorcist” and the subsequent 1973 film. Likewise, this demonic icon materializes in Rea’s exhibition as a wooden rendering that resides inconspicuously in a corner of the gallery, overshadowed by the works it accompanies, a quiet signifier of the unwelcomed internal forces that command our actions for better or for worse. In contrast, a second cinematic inspiration for Rea’s exhibition—a 2007 documentary on zoophile subculture—begs us to reconsider the ways in which we repeatedly invite desires to enter our lives and how popular belief shades our individuality and subjective judgment-constructs. While some works within “The Last Catholic” may be dangerously ambiguous or alienating at first encounter, the exhibition in totality echoes the abject tenor of Rea’s cinematic source material. Rea aptly isolates and engages these referents in a manner more personal than ever, yielding an exhibition that is compelling in many ways. (Pat Elifritz)

Through October 19 at Ebersmoore, 350 North Ogden