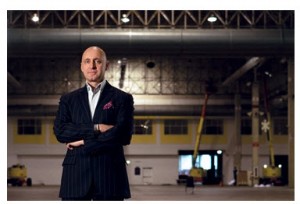 It’s been some time since Chicago was a major player on the international art fair scene. First the International Art Exposition and, later, Art Chicago, were standard-setters in the eighties and nineties, though as Art Chicago moved out of its longtime home in Navy Pier’s Festival Hall, a gradual decline led to its cancellation, under the name Next Art Chicago, earlier this year. EXPO Chicago, the product of longtime Art Chicago administrator Tony Karman, is now attempting to tap some of Art Chicago’s early prestige with a return to Navy Pier and a set-up that is, as Karman says, “respectful to the work that’s put in it.”

“Festival Hall at Navy Pier was built in large part because the art fair meant so much there was no way they could replace it,” says Karman. “So with that as a foundation there’s a way to tap a bit of nostalgia and to put a new varnish on what an art fair or an art exhibition looks like for 2012 and beyond.” Studio Gang, the architecture and design studio of MacArthur “genius grant”–winner Jeanne Gang, has designed an interior for the festival that is modeled off of the city’s urban grid, with the 120 booths of participating galleries bisected by walkways and a wide diagonal “avenue.” Karman says that capping dealers and galleries at 120 was done to maintain “quality over quantity” and prevent EXPO from turning into a mega-fair.

Even the idea of a “fair” is something that Karman and EXPO Chicago are playing down. By Art Chicago’s final years at Navy Pier the site had become as commercialized as it is today, with many of the pier’s visitors having no idea what the art fair was. But Karman doesn’t see any problem arising from this, and with Gang’s design feels confident that EXPO will become “a player on the international art fair calendar,” rivaling Art Basel in Switzerland and Miami and The Armory Show in New York. Doing so means, in large part, executing all the additional features Expo has planned for the weekend, among them:

—Vernissage: Canned after Art Chicago moved from Navy Pier to the Merchandise Mart, Vernissage was one of the art world’s biggest parties of the year. EXPO will attempt to bring back the glamour of the opening benefit, with all proceeds going to support the Museum of Contemporary Art.

—Exposure: Aside from showcasing established galleries from across the world, EXPO has invited seventeen young galleries to display work, including Chicago’s Andrew Rafacz Gallery and The Mission.

—In/Situ: Large-scale site-specific sculpture sponsored by the fair all over the city and in the fair itself.

—/Dialogues: Intended to be a year-round program, EXPO has brought in a variety of artists, curators and critics to lecture and discuss on art issues throughout the weekend.

—Chef’s Café: Chicago chefs Michael Kornick of DMK Burger Bar and Randy Zweiban of Province will have some of their signature dishes highlighted at Vernissage and inside EXPO’s Chef’s Café. (Harrison Smith)