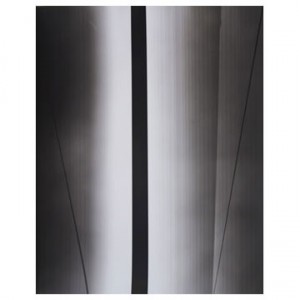 Thousands of years of visual and literary attempts to define the human experience are littered with rigid dichotomies: love and hate, Apollonian and Dionysian, form and content. Pairs of apparent contradictions help us organize the world. Shane Huffman’s current exhibition, “Sense and Sensibility,” explores the interplay of chaos and order. On one side are several 16×20-inch silver-gelatin prints of grayscales with precise, mechanical striations. Part of his ongoing “Our Experience is the Accumulation of Exposure” project begun in 2002, Huffman creates the pictures sans camera, as photograms. In contrast to his composed and measured prints is “Statistics and Probability,” a hodge-podge wall installation with objects including a scribbled-over beer advertisement, various photographs, a cut and drawn-on poster of the moon’s phases (the moon figures prominently in Huffman’s work), a mirror painted black, and a balloon containing a single breath of air.

“Sense and Sensibility” is more Aristotle than Austen, as Huffman searches, on one hand, for evidence of the limits of perception (in the photograms) and, on the other, evidence of the soul (in the collection of human residues). A compelling intersection of sense and sensibility emerges in two prints that contain miniscule areas of imperfection where straight lines bend. Huffman allows the flaws to exist, as evidence of the human hand. (Anastasia Karpova)