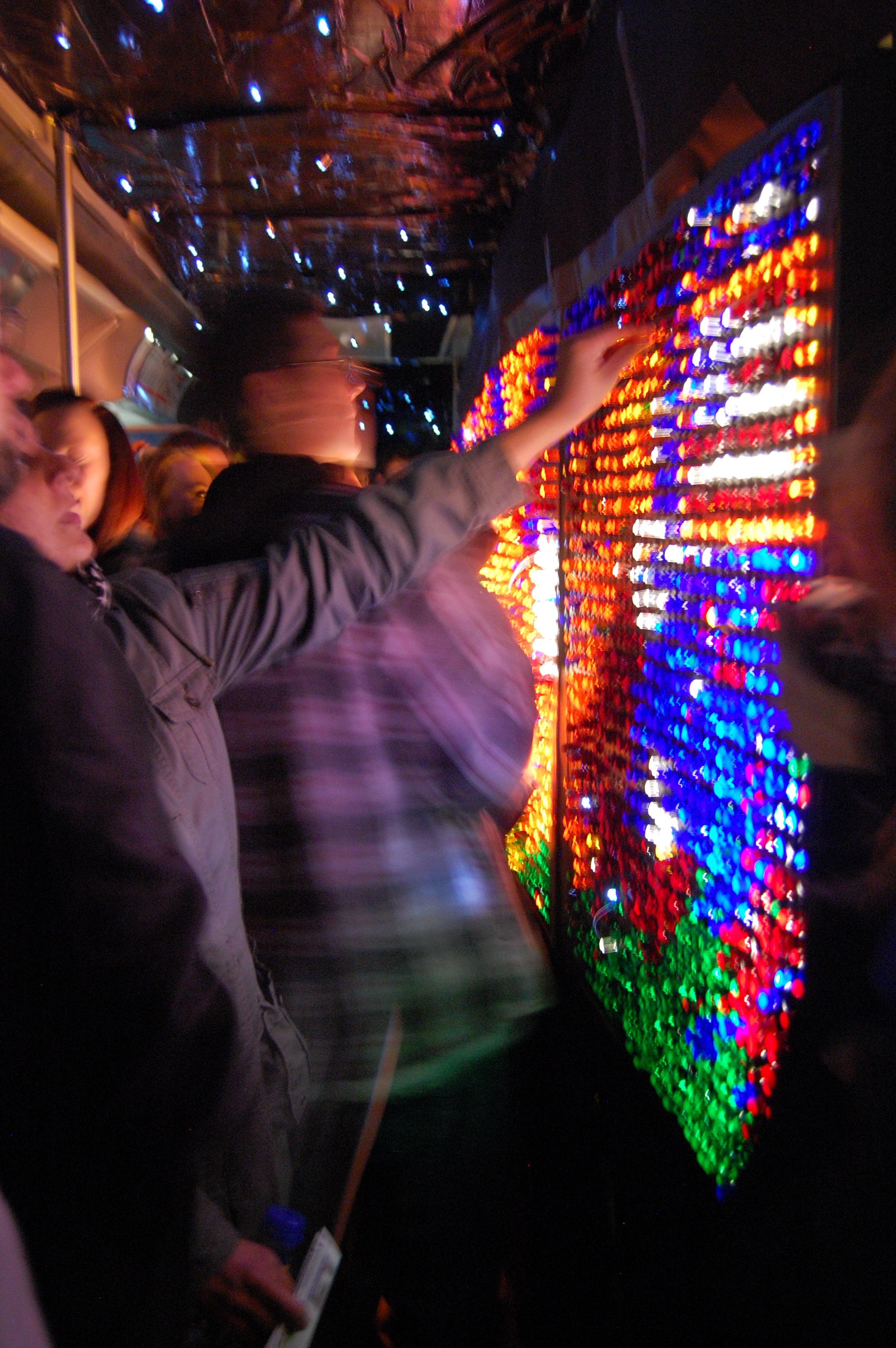 Transforming six El cars into interactive art installations, the annual mobile pop-up exhibition “Art on Track” turned the scramble to find a spot on the train into an elaborate game of musical chairs, wherein rushing from car to car was both part of the fun and the project’s prime hazard. This year’s fare included an ambient summer-camp-themed installation starring a giant Lite-Brite sunset, a walk-in cabinet of curiosities complete with palm reader, and a live fashion shoot. More like perambulatory theater-meets-theme-party than site-specific contemporary art, the scenes in each car read like tableaux vivants, plopped into the train without rhyme or reason—not exactly a bad thing, since any imaginative modification to the Blue Line’s scummy, droll interior counts as an improvement. However, given the countless examples of riveting site-reflexive art that, by definition, respond to the specifics of a certain place, exploiting its inherent characteristics rather than taking them for granted, “Art on Track” had a lot of unrealized potential. In fact, some of the most interesting parts of the whole experience, so ripe for further investigation, like the uncanny feeling of traveling to no particular destination, were mere accessories, or even hindrances, to the actual work. My tour through the exhibition was unfortunately cut short because I hesitated too long before choosing the next car and the doors closed, shutting me out. I’m told I missed the best car, organized by Noisivelvet, which featured “El Stories,” a series of improvisational skits that drew on audience members’ past El experiences and cast them as actors in the skits, making the audience members co-creators of the work. Producing an art event on public transit is doubtless already a heroic endeavor, involving many actors working together to make it happen at all—hats off to everyone for all their hard work. But the project merits further development. I’d like to see it go to greater lengths to synthesize site, art and audience experience, and to evolve from an exhibition that temporarily alters the train to an event that transforms its passengers. (Katie Waddell)

Wishing that the passengers would be transformed is a noble desire. I’m curious how you would go about doing this with a CTA car. I would argue that most of the cars in this year’s Art on Track accomplish that. Your observation of the “uncanny feeling of traveling to no particular destination” is reflected in the fortune teller’s actions. The fortune teller tries to predict the future (aka destination) but it’s really just a shot in the dark. The storytelling car (which you unfortunately missed) transformed my perceptions of riding the CTA. It made me realize how many CTA stories… Read more »