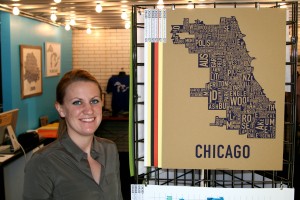 That’s one small step for Ravenswood, one giant leap for Ork Posters.

The company behind the typographic neighborhood posters of Chicago opened its new studio at the end of September—and it’s about four blocks away from its last home.

“We were basically at capacity over there,” says founder and designer Jenny Beorkrem, who plans to open her old Ravenswood location as a retail store in November. “We couldn’t add more shelving.”

Ork Posters has come a long way since Beorkrem first started making prints in 2007. When she began, Chicago was her only design, and she learned to screen print so she could produce prints in small quantities, like her inaugural run of twenty posters. Now with twice the square footage of her old place, the twenty-nine-year-old sells more than twenty posters a day and has nearly two-dozen designs.

But Chicago continues to be number one. It’s still her most popular design, and not just because Ork Posters is headquartered and printed in the city. Beorkrem, who grew up a few hours away in Iowa, says Chicago’s deep-rooted connections to its neighborhoods make posters like hers mean more to locals.

“Chicago is so tied to its neighborhoods,” she says. “That’s more based in history, that we have so many well-defined neighborhoods. Not in a geographic sense, but in a cluster around this business area, how that’s sprouted up around the city and informed the neighborhoods.”

Beorkrem isn’t the only one who has recently tapped into that history through typography. Designer Steve Shanabruch created nearly 100 neighborhood logos for his online The Chicago Neighborhoods project, while Slightly Insulting Chicago Posters takes lighthearted jabs at the city’s communities (“Andersonville: 3 Justin Bieber look-a-likes for every Swedish flag”) and sells its posters through online vendor Etsy. That’s also where Beorkrem got her start selling her work before word-of-mouth and blog buzz allowed her to quit her graphic design job and devote herself to Ork Posters full-time.

“[The Internet] completely changed the crafter’s ability to make a living making what they want,” she says. “You know you could design something and produce it and have it for sale in a week. It’s very immediate.”

These days, Beorkrem spends more time manning her business than designing, though new city posters for Atlanta and Denver are in the works. Fans from around the world email requests for new designs, and she says it’s the small U.S. cities that make the most impassioned pleas about why they deserve the Ork treatment. Half the feedback she gets, though, are the stories behind the purchases, which she learned aren’t always about where you currently call home.