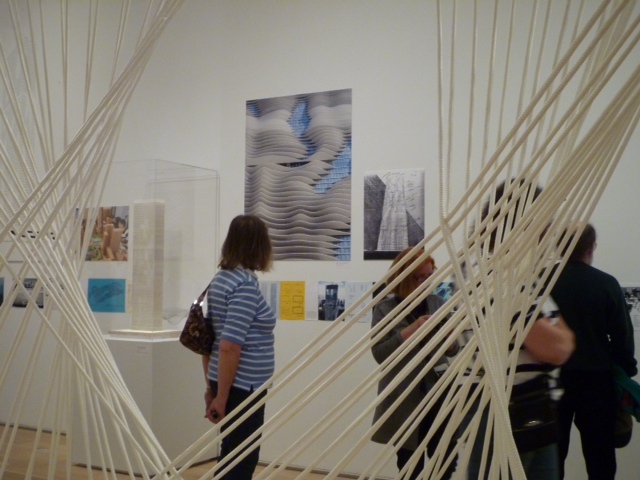 Despite Jeanne Gang’s reputation as inheritor of the mantle worn by Sullivan, Wright, and Mies, “Building: Inside Studio Gang Architects,” which opened last week in the Art Institute’s Modern Wing, emphasizes the collaborative energy and achievements of the studio over those of the individual. Drawings, plans and proposals diffuse the old model of the architectural genius and his great static monuments to reveal the actual teamwork of the creative process, but not only among the members of her practice; a wealth of materials in the exhibition visualize the crucial dialogues and fluid synergies between a building and its site, the clients who commission, and the buildings’ future inhabitants. Studio Gang and the curators at the AIC have created a dynamic, interactive and graceful space, papering the walls with information—photographs, plans, drawings and models of several finished and unfinished proposals. The viewer leaves with renewed insight into the complexity and excitement of Studio Gang’s engagement with the problems and possibilities of our moment, and importantly, the centrality of good design to the future of cities and urban life. Aqua Tower is featured prominently among projects far-flung and local, from Hyderabad, India to Glencoe, Illinois. The Arcus Center for Social Justice Leadership, currently under construction at Kalamazoo College in Michigan, will make use of low-carbon, highly thermal construction materials and techniques. 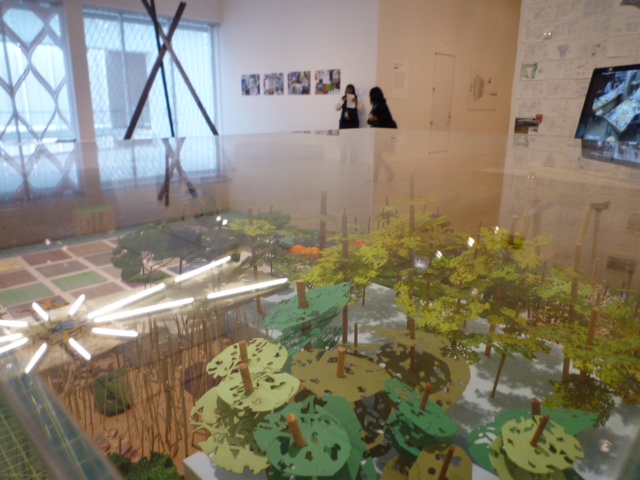 Sculptural rooms formed of rope stretched diagonally between circular frames activate the center of the gallery, offering visitors a place to watch videos, study additional materials, or sit down to rest and reflect. The rope motif comes from the Studio Gang-designed Kaohsiung Maritime Cultural and Popular Music center in Taiwan. Gang is often inspired by natural forms: honeycombs for the proposed park on Northerly Island, milkweed pods for Lincoln Park’s Nature Boardwalk (opened in 2010), and time-lapsed photographs of rowers for the proposed roof of the Chicago River Boathouse. The idea for the Chicago River Infrastructure Project came out of an “eco-salon” held in Gang’s office, where experts and advocates came to discuss environmental issues. “The firm prides itself,” according to curators Zoe Ryan and Karen Kice, “on looking outside of architecture for tools to foster rigorous dialogue and further the discipline.” “Building: Inside Studio Gang Architects” immerses viewers in the visual evidence of a process of building which begins with understanding the social, historical, environmental and political contexts of buildings and the people—from Hyderabad to Kalamazoo to Chicago—who will use them. (Janina Ciezadlo)

Through February 24 at the Art Institute of Chicago, 111 South Michigan