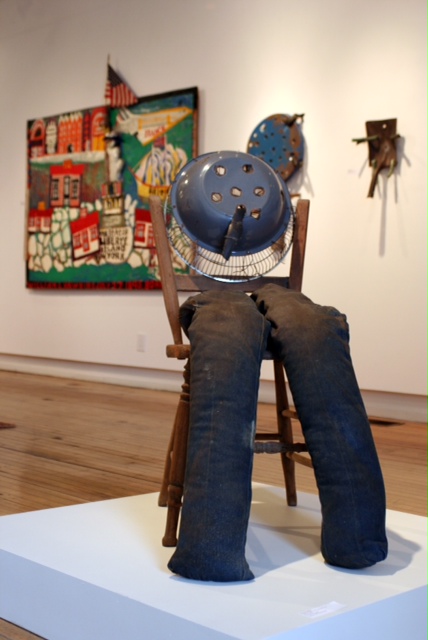 Some artists refuse to sign the face of their paintings, finding it intrusive to the overall image. William Hawkins (1895-1990) clearly did not participate in that dialogue of modernist painting, as each of his paintings features his name and birth date in bold, large font. Their prominence evokes the creator’s pride; despite his old age (Hawkins was in his eighties when he created these works), lack of formal training and possession of little more than a single brush, his creative vision surfaces in brightly colored paintings of American cities, religious motifs and natural themes.

Jan Petry, chair of Intuit’s exhibits committee, has paired William with another Hawkins: Hawkins Bolden (1914-2005), a Memphis outsider artist who became blind in childhood and felt his way through life by creating works from discarded materials. His sculptures combine metal, pierced pots and pans, and belt and carpet scraps. Bolden titled these “Scarecrows”—with holes for eyes and cloth fragments for tongues—and did use them to keep birds from his garden.

The two Hawkinses shared a few things besides a name. African-American males with Southern roots, both are master self-taught artists who used everyday materials to create affective and raw visions of the world. Their output, however, varied considerably: brightly colored paintings on cardboard and Masonite versus totem-sculptures assembled from hole-littered metal, occasional wood parts, and multiple leather and carpet “tongues.” One visual, the other tactile. The two artists’ works co-exist surprisingly harmoniously in Intuit’s gallery space. (Anastasia Karpova)

Through January 5 at Intuit: The Center for Intuitive and Outsider Art, 756 North Milwaukee