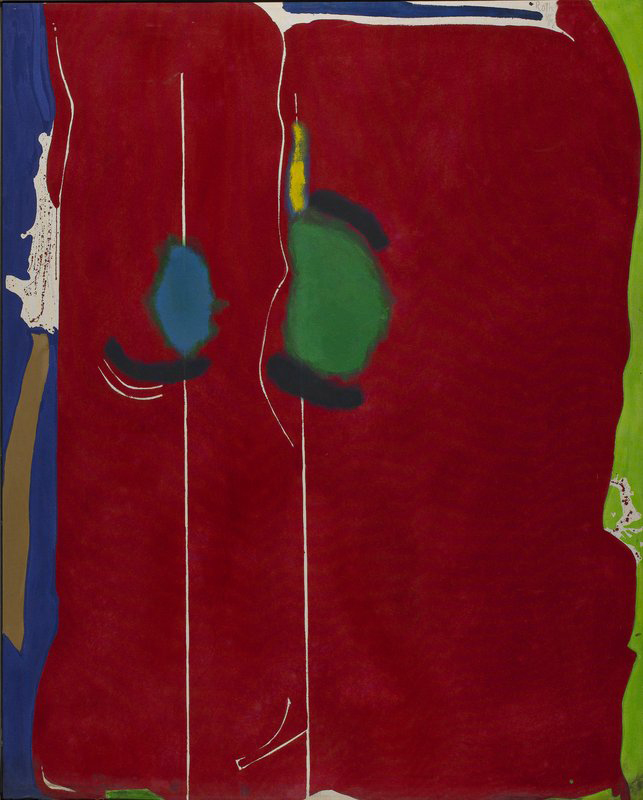 Jack Roth (1927-2004) was an intermittently successful artist. Studying with superstar faculty (Mark Rothko, Clyfford Still, Richard Diebenkorn) at the California School of Fine Arts, he found early recognition in the Guggenheim’s 1954 “Younger American Painters” exhibition. But unlike many artists in that show, his gallery career didn’t skyrocket, so he went back to school for mathematics. What went wrong? As Michael Goldberg said about gestural painting of the fifties, “People thought that if they whipped it up a lot, sooner or later they’d find something to hang a painting on.” That might apply to Roth’s 1960s paintings in this show. They seem to aim no higher than self-expression, and his self was apparently frustrated. As the show demonstrates, he also tried his hand at box assemblages. But unlike the mysterious and inviting boxes of Joseph Cornell that became iconic in the 1950s, Roth’s boxes feel annoying and claustrophobic. They may well mirror how it felt to be inside his head, but who wants to join him there? So he put that busy head into calculus and had a career in the math departments of small colleges. Still, the art world beckoned. One of his Pop Art drawings was purchased by MoMA in 1963, but it wasn’t until 1978 that he got really busy with painting, and was soon picked up by a major New York gallery. What was different about his new work? It was no longer so much about paint, which he started staining on the canvas instead of brushing. And it was no longer so much about him. It was as if he had joined the Bauhaus in exploring the principles of design that might illustrate the essay he was writing, “Towards a Mathematical Theory of Art.” Unfortunately, that philosopher’s stone of art theory was never fully realized. But his paintings were, having the simplicity and wonder of the very best of modern graphic design. A playful troupe of colorful shapes seem to have wandered onto the artist’s large canvas, where he choreographed them into entertaining poses. The results feel calm, yet precise, as complexities seek resolution, as with differential equations. Absent of anger and anxiety, but not intelligence—they are delightfully decorative. Possibly aware that he had hit his groove, the artist made several hundred of these designs until illness and a restless mind brought an end to his late-career burst of visual creativity. (Chris Miller)