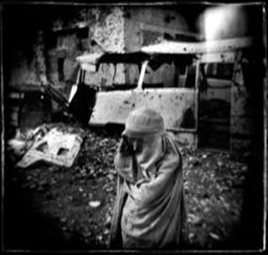 What happens when sophisticated shutterbugs start fooling around with a decidedly low-tech camera (the plastic Holga) that produces anything but f64 “realism”? Back in the day, the Holga photographers exploited the camera’s supposed defects of producing blurry and murky images, and came up with credible pictorialist-impressionist prints. Jerry Cargill’s studies of lakes and woods are the single bow to the old school in this show of eleven contemporary Holga practitioners. The new school, represented here by ten photographers from around the world, has found ways of making the Holga turn out clear realistic photos, although they are a bit faded and tend toward the dark side. Teru Kuwayama has gone as far as taking the Holga to the front lines of Afghanistan as a photojournalist and carrying back moving deep-toned images of the war. It turns out you can do a lot of things—good ones—with this plastic wonder.  Susan Bowen proves that with her glowing color paneled-panoramic takes of twisted pipes and grain elevators. Never underestimate the ingenuity of photographers. (Michael Weinstein)

1 Comment
Inline Feedbacks
View all comments
What People are Saying