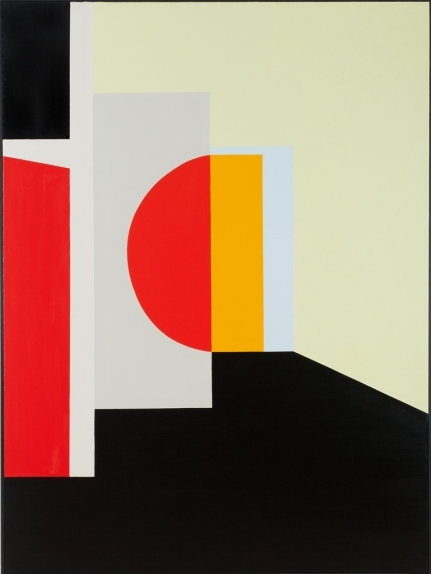 “Room with Doorway,” oil on linen

How would the comics section of the newspaper appear if all the figures, human and animal, had been removed? On first viewing, it would be refreshing not to find the obvious, witless narratives and the all-too-familiar bone-headed characters. It would open up a world of endless possibility for whatever else might fit within the sketchy interior views that remain, but there would be no point in a second viewing. The same is true with Clare Rojas’ wall-size paintings now showing at Kavi Gupta. What’s missing are the curious, uncomfortable human figures with which she used to populate her cartoon-strip style work. What’s left is the angular, aggressive, institutional-like environment that possibly made them so disoriented and socially underdeveloped in the first place. It’s a kind of hell—but not one that is unfamiliar, as it can be found everywhere from grade-school cafeterias to high-end corporate décor. The solid blocks of color have been painted without the least trace of sensitivity, regarding either edges, interiors or tones—as if they had been executed by minimum-wage workers doing no more than what they were told. Viewed singly, and in screen-size reproduction, they are rather lively, engaging compositions that can provoke a sense of wonder and power. In some, the dynamics resemble the designs painted on ancient Southwestern pottery, which also favored the colors of black, red and white. But a room full of them is too much to bear, unless you really enjoy pain. (Chris Miller)