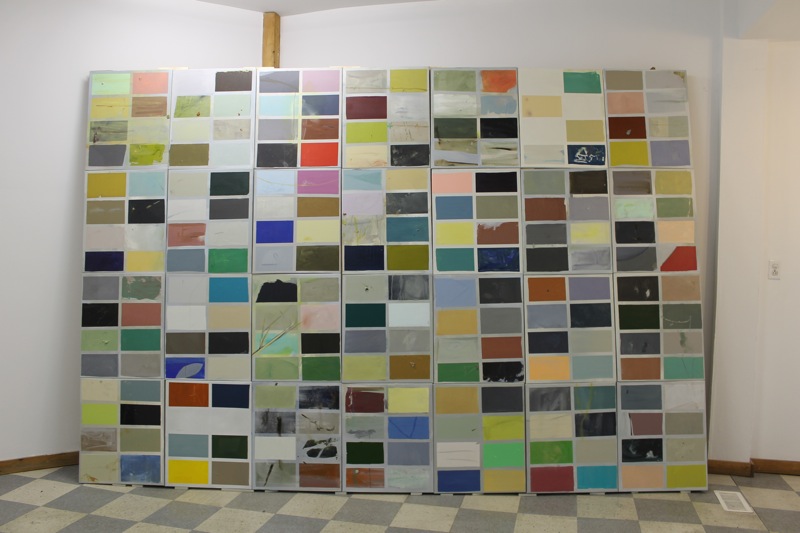 In retrospect, antagonisms are reconciled and oppositions are synthesized, so that Stalin and Hitler were pretty much the same thing. Ditto Romans and Christians, astrophysics and particle physics, ballet and tap, tomato to-mah-toe. But what if, asks Slavoj Zizek, we could “enact a parallax shift” in order to perceive antagonisms in their “positive” role?

Such tensions are massaged quite satisfyingly in “Colorchartness,” Emiliano Cerna-Rios’ agglomeration of twenty-eight canvases on view at The Storefront, which has emerged rehabilitated from a major fire this past summer. Painted with acrylic, oil and house paint, the canvases lean in the gallery’s several odd corners. Each painting is masked off with eight rectangles of varying hue, mostly framed in dull silver, evoking Gerhard Richter’s color grids and Sol LeWitt’s wall paintings—but only loosely. The measurements are eyeballed, the masking is approximate, and the color swatches themselves are far from uniform, with streaks of contrasting tones, clumps of medium, and ceramic fragments disrupting the depthlessness of pure chroma. The bravura is so pronounced, even erupting at one spot into a representational tree branch that translucently transgresses the grid’s boundaries, making the gridded seriality seem like a premise for gesture and process, or an attempt to organize a studio experiment. The composite artwork commands the room with intensity and autonomy. Its image easily overflows through the picture window onto California Avenue passersby.

Now, it is easy to see that the supposed conflict between the romantic defenders of humanism (i.e., those who paint with vigorous, abstract expression) and the macho industrial barbarians who stormed their citadel (i.e., the bluntly precise minimalists) is neither reality nor illusion. The contradictions are ever-present but in movement. Likewise, Cerna-Rios’ composite artwork commands the room with intensity and autonomy. Its image easily overflows through the picture window onto California Avenue passersby, and yet its repetitive, painted sculptural solidity reminds us that the boundaries of rooms, buildings and bodies are as “real” as they ever were. (Bert Stabler)

Through October 20 at The Storefront, 2606 North California.