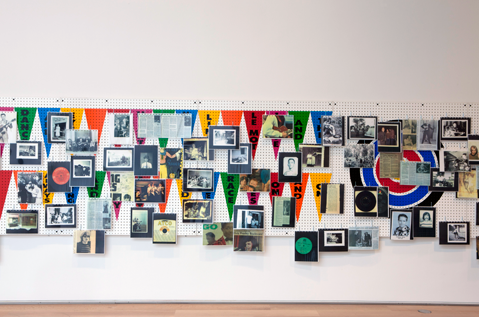 Allen Ruppersberg, “No Time Left to Start Again/The B and D of R ‘n’ R”

“No Time Left to Start Again/The B and D of R ‘n’ R,” an expansive new artwork at the Art Institute of Chicago, continues Ruppersberg’s established practice of presenting culture by way of its advertising and visual materials. The installation in the Modern Wing’s photography galleries takes on the history of rock music (the title’s “R ‘n’ R”) from its birth to its death (the “B” and “D”). Ruppersberg selected, scanned and laminated rock ‘n’ roll memorabilia, including musicians’ obituaries, album covers, and snapshots. The mementos hang on brightly colored pegboards, reminiscent of a fan-club headquarters, while a black leather couch and music on the speakers invite viewers to follow the Rolling Stones’ advice to get “lost in your rock ‘n’ roll.” Yet something hinders; visitors behave in typical museum mode, quietly contemplating and plainly observing the presented materials.

Ruppersberg’s multi-faceted story of American rock’s birth from slave-era folk music, church choir gospel, and Caribbean and other influences stands frozen despite its colorful loudness. Ruppersberg succeeds in museumifying rock ‘n’ roll by presenting piles of obituaries and a vast archive of collected tokens—in essence, rock’s so-called death. His ordered and laminated presentation leaves a feeling of nostalgia for the time when it was all radical. (Anastasia Karpova)

Through January 6 at the Art Institute of Chicago, 111 South Michigan