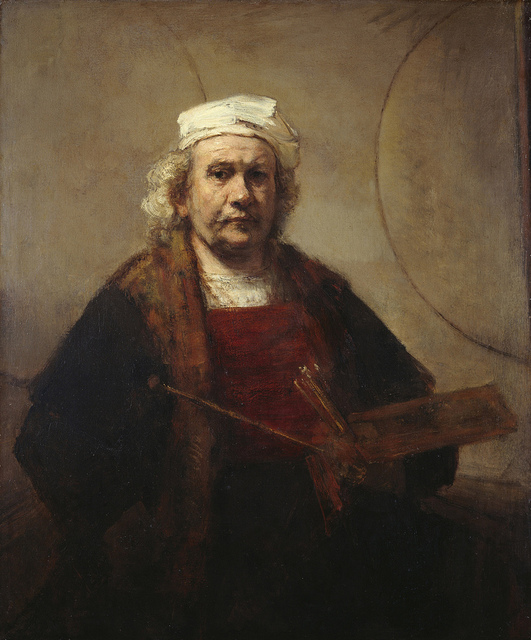 The Kenwood House collection was assembled mostly in the four years following 1887 to help the mega-rich Irish beer dynast Edward Guinness eventually qualify as the first Earl of Iveagh. Built strictly by his Bond Street art dealer (whose clientele also included J. Pierpont Morgan and Henry Clay Frick), Guinness’ collection reflects a taste for the small, domestic and sentimental, with an emphasis on depictions of elegant young women, children and hunting dogs. There are many portraits from the eighteenth-century golden age of English portraiture, several of which whose subjects’ faces seem to have been cut and pasted into a serviceably upscale background. At bottom, there are a few painfully mediocre Bouchers and a faux Rubens.

Fortunately, the 1665 Rembrandt “Self Portrait with Two Circles” went on the market during the collection’s amassment, and Guinness had the wealth required to buy it. Among all of Rembrandt’s role-playing and self-scrutinizing projects, this is the one portrayal of himself as a man who weighs and measures the universe—i.e. an artist, with no heroics, just the dead-set determination that every important job requires. It’s a great painting, whether you’re standing twelve inches away from it or across the room. And unless you travel to Kenwood House, this is the only time you can see the brushwork and last-minute scratching up close. Another great painting is Gainsborough’s monumental portrait of Mary, Countess Howe. As the very believable story goes, the young artist was so infatuated with this intelligent, elegant young woman (an ancestor of Lady Di) that he had to relieve himself in a local brothel. And it’s not about flesh, it’s about force of personality.

These two paintings are worth a trip anywhere to see them. But also, the show contains something like a career retrospective of Sir Joshua Reynolds, the first president of the Royal Academy, including a self-portrait done months before his death. The exhibition ends in a whimper, with portraits of too many cute, pampered children. (Chris Miller)