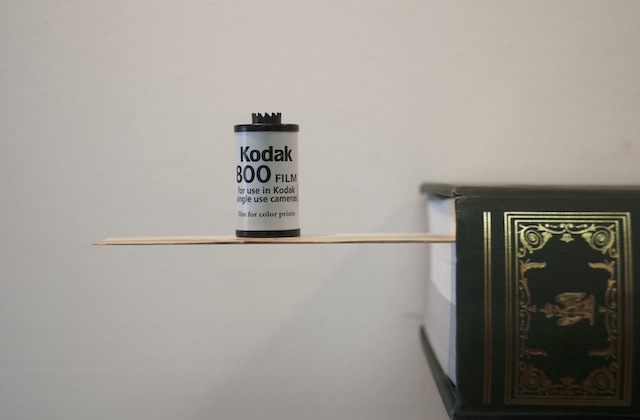 Seeing Benjamin Bellas’ show at the storefront gallery known as Slow reminded me of the Museum of Jurassic Technology in L.A. Entering Slow, one encounters a long, gently curving pew that diagonally divides the small space into two neat regions. To the left is a lamp shining into an open silver-lined barrel with an image of a waterfall at the bottom. This is echoed a bit further along the wall by a boot containing a spider web standing on a heap of slate. On the far wall, facing the entrance, is a distorted video of the Chicago lakefront shot from above, set to a grand score. Walking up to the screen allows you to see the large dark printout, loosely hung from an adjoining wall, in which the dark outline of a door can be dimly made out, and a vinyl sticker of a shadow stretches along the floor behind the pew. Continuing back to the front door, a thick volume protrudes from the wall like a shelf, from which, a bookmark juts, on which, a roll of film is perched. 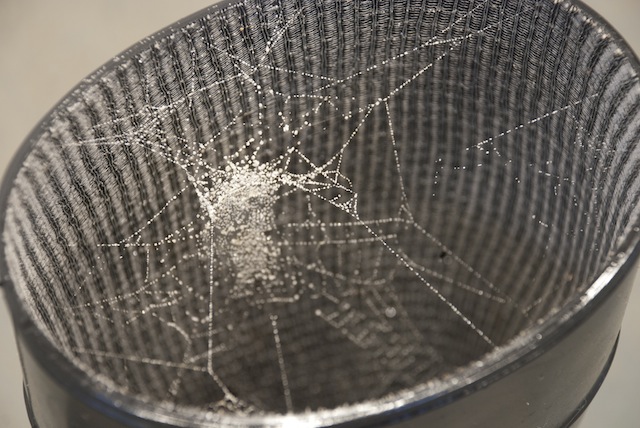 It reminds me of the Museum of Jurassic Technology because that modest yet arresting institution has its curious artifacts, but is, to a large extent, about presenting domestic objects with evocative lighting, amid a swirl of occult minutiae. It turns out that the web in the boot is made by a spider that usually eats its webs, and the book sticking out of the wall is an unrealized Stanley Kubrick screenplay about Napoleon at Elba. The silver in the barrel was electroplated, and the Annie Leibovitz Niagara book is placed inside to recall the deaths of barrel-riding thrill/death-seekers. Both the vinyl shadow (of the statue of Copernicus at the Adler Planetarium) and the pew have specific somber backstories and precise geographic placements, and the video was shot from a helicopter choreographed to follow steps of Balanchine’s “Apollo” ballet. In the end, it may not matter if the stories told about art are true when their goal is to re-enchant the mundane furniture of our everyday somnambulism. (Bert Stabler)