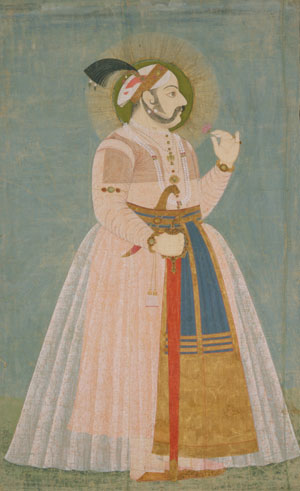 This exhibition focuses on the courtly life of the former four hundred petty states once found on the Indian subcontinent. Their princes were described by one of their English masters, Lord Curzon, as “half-Anglicised, half-denationalised, European-women-hunting, pseudo-sporting, and very often in the end spirit-drinking young native chiefs.” So as Lord Curzon might expect, there’s an emphasis on bright, shiny, gem-encrusted bling in body ornament, knives, rifles, gaming boards and more. But there’s also a hint of the many styles of opaque watercolor paintings that were developed in that diverse area, beginning with the imperial Mughal school of the sixteenth and seventeenth centuries.

The Mughal school was imported from Persia and vigorously cultivated by Emperor Akbar and his immediate successors. Their aesthetic demand for well-observed detail, variety and aggressive high-energy probably carried over into the rest of their reign, accounting for their extraordinary success in conquering and ruling such a vast and diverse area. But as imperial ambitions faded, the princely patrons of the following centuries seem to have preferred the depiction of more lyrical, dream-like worlds, with much more attention paid to themselves. This show has a few good examples of such erotic and psychological themes. Throughout both the painting and the jewelry, there seems to be a delight in smallness—as if the world were filled with wonders beyond the limits of human perception. You might wish to bring your own magnifying device.It may not be an aesthetic highlight, but the show includes a thirty-foot scroll depicting a procession led by the Raja of Mysore (r.1799-1868) in honor of the god Shiva, as well as the British official who actually ran the city. As you press your face against the glass case to follow all the details, it really seems like a trip in a time machine, with its depiction of the various kinds of people that might be found on the streets of nineteenth-century India—from nearly naked beggars and poor widows to priests and soldiers, all recorded for the entertainment of a British collector.

The other fascinating historical focus is an entire room devoted to the furnishings and architecture commissioned by the last Maharaja of Indore. He was quite wealthy and obviously enthusiastic about twentieth-century European modernism. But there’s something cold and depressing about the world he created, and his portraits show him as detached from it as I feel, though I wouldn’t mind staring at his Cartier mystery clocks every morning.

Appropriate for the emphasis this exhibit places upon history, most of the pieces are more about status than enjoyment, but remarkable Indian painting is so infrequently shown in Chicago that this remains a very important art exhibition. (Chris Miller)

Through February 3 at the Field Museum, 1400 South Lake Shore Drive