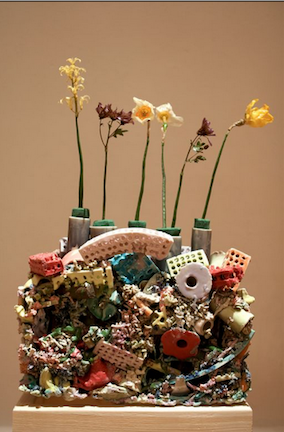 As this exhibition demonstrates, the non-traditional practice of ceramics in our age continues to spin centrifugally away from formal expression or a sense of clay’s unique plastic qualities. Instead, it’s all about ideas, the quick and clever kind like sound bites or thirty-second commercials, transforming the gallery into a kind of Halloween funhouse where the viewer can be expected to get one joke and then move on to another. And just like those seasonal displays, most of these pieces tend toward the dark and eerie, especially with the “family heirlooms” that Blake Jamison Williams has knit out of ceramic pieces shaped like human finger bones. Often there’s a lingering anxiety, characteristic of contemporary art, that something in the world has gone terribly wrong. That’s the feeling that accompanies the large head-like pots of Xavier Toubes that may function simultaneously as attractive home furnishings, science-fiction aliens, folk-art face-jugs, and tributes to the monster heads of Leon Golub.

But there is also a lot of technical achievement here that has to be admired. How did Jeremy Hatch prevent the long branches on his life-size ceramic treehouse from breaking off?  How did Richard Shaw get the surfaces of his ceramic assemblages to perfectly resemble recycled pieces of wood, paper, rubber or plastic? How did Thomas Schmidt get an eight-foot ceramic mural to resemble a roll of crumpled wrapping paper?

And although perfect verisimilitude is common to the portraiture found in wax museums, Joseph Seigenthaler has cranked up the rubbery hyper-realism so that it’s as funny as it is creepy.

Various other kinds of contemporary art practice, such as performance, video, photography and community or audience interaction are also included. Has anything been left out? Only the free-form sculptural work that, like its counterpart in Abstract Expressionist painting, may be fading into art history. Perhaps that kind of “no rules” has been ruled out. (Chris Miller)