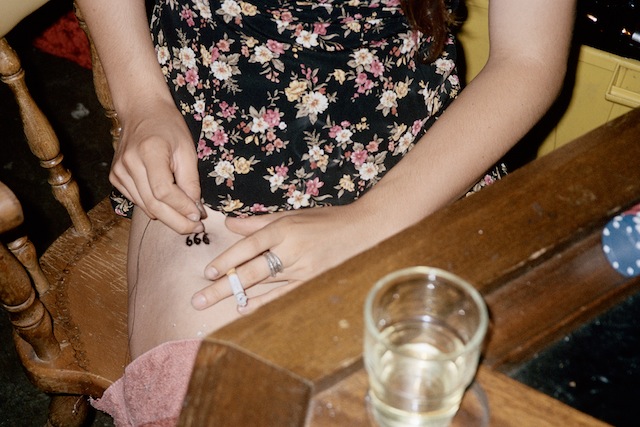 The gallery inaugurates its new “Coat Check” space for young and emerging photographers with a show that, as curator Matt Avignone aptly puts it, brings forward “strange possibilities.” Strange means funky-to-the-max for the four artists here, whether they craft and shoot transitory constructions, hone in on intimate moments, do studio studies, or go out in the streets in search of odd forms and pungent graffiti. The spirit of the show is best captured by the close-in shots with a human element. In an inspired curatorial move, Avignone has put on one wall a photo by Matt Austin of a woman holding a cigarette in one hand and tattooing “666” on her thigh with the other, and across from and directly opposite that image on the facing wall a shot by Bobby Scheidemann of two people’s hands engaged in a finger pull with a cardboard twist. If we wanted a musical equivalent for the exhibit it would be the Talking Heads’ call to “stop making sense,” and go over to the far side where we travel far more often than we think when we assume our respectable official selves. In this show, it’s all in the curation. (Michael Weinstein)