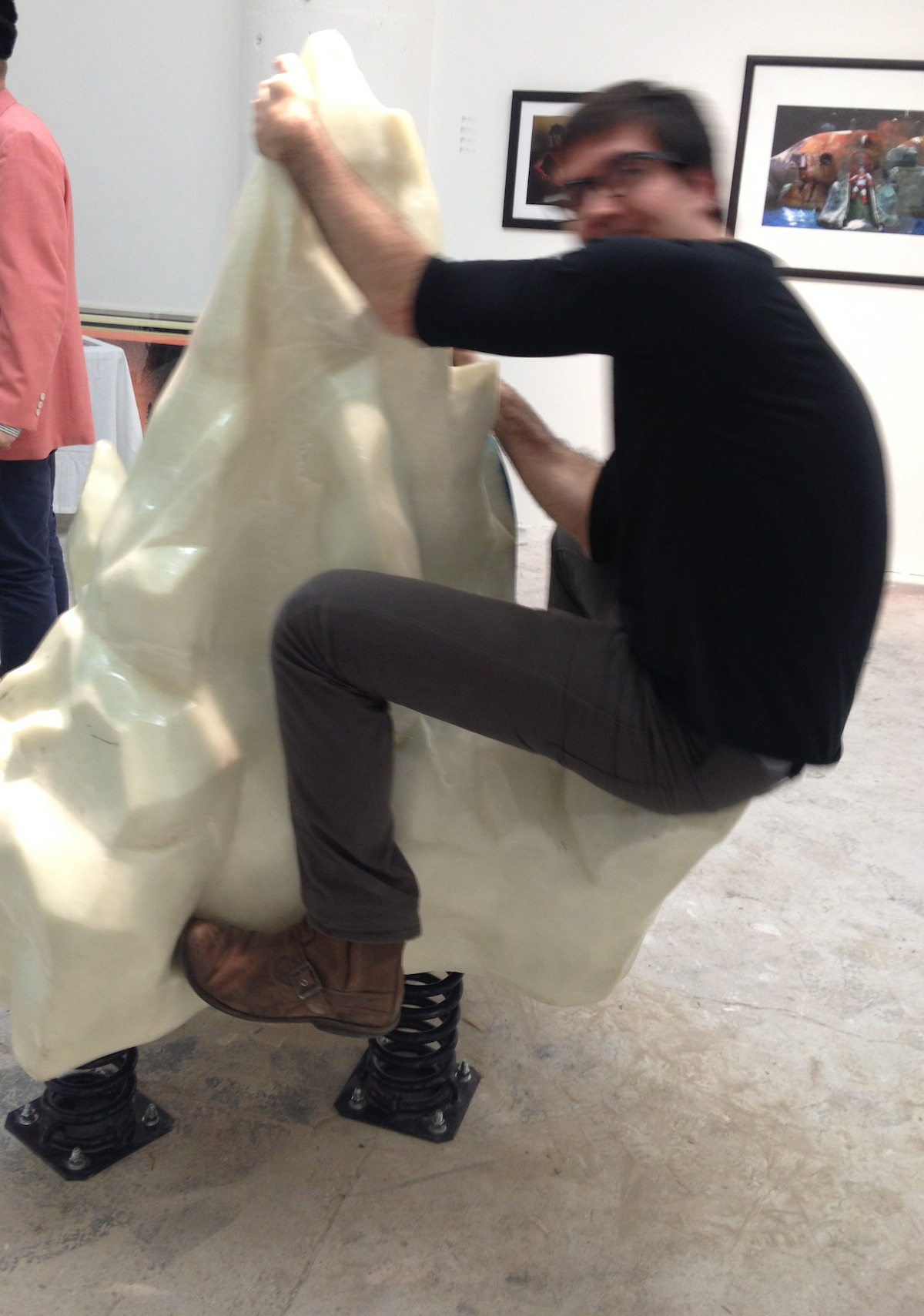 Did you know that the South Side MDW airport predates ORD? Whatever the metaphor, last weekend’s MDW Fair—the third iteration in two years—was the best it’s been yet and a very promising showing of Chicago’s dynamic creative population. With organizational duties shared among the Public Media Institute (Ed and Rachael Marszewski), Document (Aron Gent’s photo publishing business), Roots and Culture, and ThreeWalls, the fair’s conglomerated energy made me hopeful for the future of this art fair and Chicago’s independent art culture. In total, it was a fun event, and I hesitate getting overly serious about the MDW Fair’s consequences or meanings, even if the success of the fair means serious business for all involved. A few observations and reflections:

MDW Fair trend #1: Affordable art. From the publications tables downstairs, which featured low-cost published multiples and artists’ books, to low-priced prints throughout the fair—prints at $5 to $25 and a large-scale sculpture at $500 (John Harms’ “Kissing Booth”)—participants gladly realized the appropriate economy of scale for this alternative art fair. 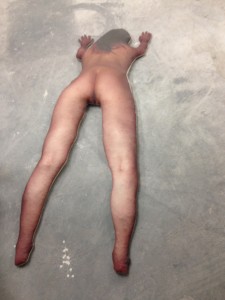 Overheard at the MDW Fair: “I love you.” From many people to many other people. It wasn’t just the free Duvel and $3 artist-designed cocktails that allowed people to open up and express their admiration for one another; a sense of feel-good community partnership also abounded.

Best of show: Kate Hampel’s “Self-Portrait: Lying” in the ACRE group exhibition. This naked self-portrait sculpture of the artist lying face down, with torso, head and hands foreshortened and disfigured was simply a body pillow filled with rocks. That viewers sometimes accidentally stepped on the artist’s body fulfilled the painful self-image as a tragic performance.

Runner up: MDW’s poster and graphics. Jeremiah Chiu of Plural designs all of the Public Media Institute’s graphics (including show posters, signage, and Proximity’s magazine, usually printed on newsprint). For MDW the theme seemed to be hand-painted bodega signs, streamlined to a few vibrant squiggles and colors.

MDW Fair trend #2: Collaborations. The best collaborations at MDW Fair were among artists and their facilitators. That is, galleries and curators took on a role beyond simply promoting artwork they liked. Much of the best art depended on the shared creative labor and trust of all involved. Projects such as Abundant Archive, for example, a new curatorial venture by Jessica Cochran, looks promising. So was JC Steinbrunner’s new “COLLABS” series, which paired artists to produce new work. 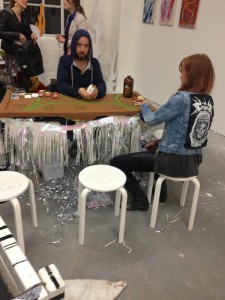 Gambling with and for art at Peanut Gallery

Best “Huh?!” Moment: BDPT. Everyone was wearing a round, brown sticker that read simply “BDPT,” like members of a secret society. Finally, the mystery was about to be revealed in the Schlong group exhibition, just past the cooler of for-sale sausages and spicy cheesecake samples. BDPT is a photo-documentary research project about the genital leanings of fair goers—left, right or center? Participants were asked to keep their pants on and confess which direction their indiscretions swung. Was it a euphemism for sexual politics or just a cute form of public outing? Talking with the organizers/researchers didn’t resolve my confusion, but I participated anyway, just for the sticker.

Runner up: Jake Myers riding that fiberglass glacier. As if a glacier atop giant black springs isn’t surreal enough, wait until you see a grown man rock that thing like a bucking bronco.

MDW Fair trend #3: Participation. The booths with just paintings hanging on the walls were eerily quiet during the fair. Many artists capitalized on keeping viewers engaged. Best example: Peanut Gallery’s gambling tables where participants could make and play for artworks. 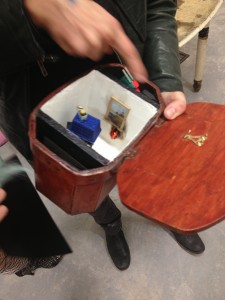 Best group exhibition: Clutch gallery’s miniature group exhibition was expertly explicated by docent (and clutcher) Jeffrey Grauel, who pointed out the treasures within, including Mican Morgan’s “domestic monument”—she’s the keeper of the AIC’s mini Thorne Rooms, and a couple tooth-like sculptures, one a fang made from molten gold and another that was supposed to be sculpted from cocaine but was swapped for another substance at the last moment.

MDW Fair trend #5: Experimentation. It was good to see artists stepping outside their comfort zones and showing work they wouldn’t normally make for a gallery setting. Salability didn’t seem to matter, as long as people took risks, and the fair proved a safe place to incubate creative risks in public.