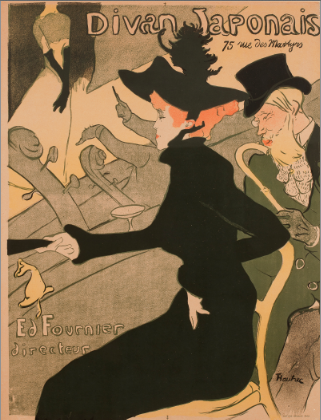 The mutual influence between French and Japanese printmakers comprises a complex, multi-dimensional set of exchanges that go far beyond the Impressionist period. “Awash in Color,” on view at the University of Chicago’s Smart Museum of Art, includes several graceful Mary Cassatt aquatints whose emphasis on patterning and faded color display Cassatt’s emulation of Japanese woodblock prints coming into France in the late nineteenth-century. Henri de Toulouse-Lautrec’s lithographic posters, whose spatial relationships and compositions break with Western pictorial traditions, and whose subject matter echo the actors and geishas of ukiyo-e, are accompanied by galleries full of stunning work by less-well-known French printmakers (and well-known artists like Degas and Vuillard) from the period in which a taste for things Japanese was referred to as Japonisme. The exchange of ideas and materials went both ways, however, and one notable import to Japan from the West was a color known as Berlin (or Prussian) blue. It was first synthesized in Germany around 1704, and was used in the 1830s in the famous woodblock landscapes of Katsushika Hokusai and Utagawa Hiroshige, among others. Aniline dyes derived from coal tar made their way to Japan where their vivid colors, like magenta and emerald green, mark the Meiji Period, which also saw a shift from woodblock printing to the imported industrial techniques of photogravure and lithography. 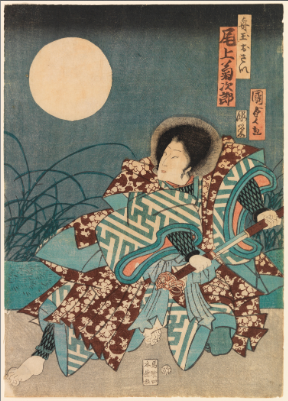 The curators, Anne Leonard and Chelsea Foxwell, chose works that reveal parallel but separate developments of color printmaking in the East and West before the advent of trade and diplomatic relations between the countries launched Japonisme. Originally conceived with the university’s print collection in mind, the exhibition was, under the direction of a team of curators, expanded to include information on all aspects of the subject—myriad details of technique and production, patronage, connoisseurship and cultural history—making this an opportunity to see exquisite and instructive work from collections across the country. (Janina Ciezadlo)

Through January 20 at Smart Museum of Art, 5550 South Greenwood