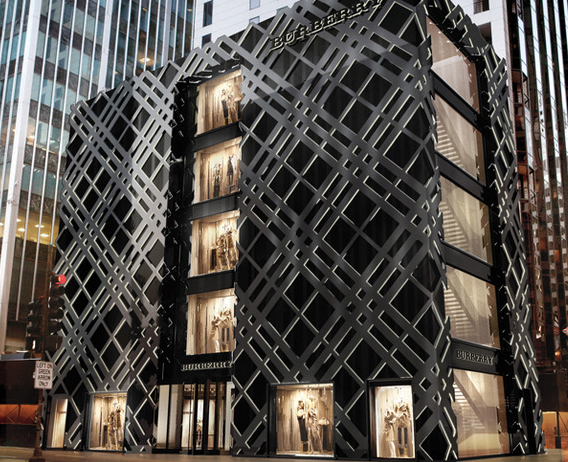 The Magnificent Mile is not what it used to be. Although the site of prestigious and historic architecture like the Wrigley Building, Tribune Tower and Drake Hotel, the pseudo-boulevard now seems more suburban than urban, with so many inward-turned shopping malls. In the mid-1990s, architecture critic Blair Kamin lamented the avenue’s “descent from exquisite ensemble of beaux-arts buildings to a crass visual jumble,” dubbing it the “Mediocre Mile.” Today, there is a budding renaissance happening on the strip, most vividly illustrated by the new Burberry flagship store, the best architectural addition to the district since the John Hancock Center nearly forty years ago.

The Burberry building is stunning, in that it fuses fashion with architecture. At five stories tall, dressed in black with an ornamental chrome tartan check, it stands like a model on the runway of Michigan Avenue. In contrast to the blank facades and anonymous awnings of neighboring competitors like Chanel and Gucci, the Burberry store demands attention and draws the eye—like anything exemplary among the ordinary. The structure has two massive, forty-foot vertical windows set back into the face, breaking up its mass and offering glimpses inside. A waterfall of light serves as backdrop for a sleek minimalist staircase rising on Ontario Street. The building’s elegance escalates when darkness falls as LED lights softly illuminate the chrome plaid from the rear, producing an outfit change into the enduring black-on-black.If you’re not intimidated, you’ll be compelled to walk inside. The interior motif consists of mirrors, glass, chrome and dark woods. Sales clerks in tailored black suits saunter with iPads among large screens playing runway shows on a loop. Instead of being stuck in an aristocratic, equestrian past, Burberry has embraced delivering classic London styles that work in the modern world. This idea informs the theme of the interior design. The strategy has produced profits, with the company opening twenty-three new locations in the last year, along with upgrading current locations, like its store in Chicago. Much like Apple, Burberry has incorporated architecture into its brand identity, as all the stores have a distinct recognizable design.

Burberry’s (re)opening is the most recent example in the revalorization of North Michigan Avenue. It marks a crest on the British wave of retailers opening on the Mile, including Topshop and AllSaints. New planters with bright flowers on the sidewalk and in street medians significantly richen the pedestrian experience. Even Chicago’s very own starchitect, Studio Gang, has been commissioned to design a ballroom atop the Marriott Hotel (540 North Michigan) with attractive preliminary renderings. If the Burberry flagship can inspire a new standard in architecture and design for North Michigan Avenue, there can be a return of magnificent to the mile. (Paul Kulon)