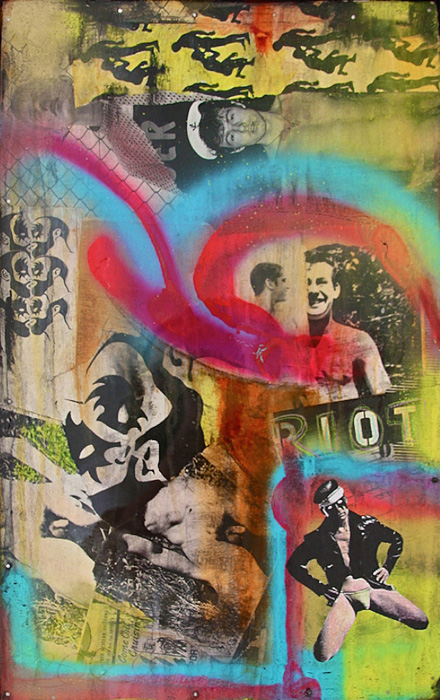 Anonymous Los Angeles-based street artist HOMO RIOT got on a plane from Los Angeles to Chicago. Once he landed, he began roaming the streets, pasting stickers of two bearded, bearish men with masks over their eyes kissing, onto newspaper stands and streetlight poles everywhere. I came across one in my not-so-radical gay neighborhood Andersonville, took a photo of it with my “It Gets Better”-endorsed Apple iPhone, and picture-texted it to a fellow queer friend. “Cool!” she texted back. What happened afterward involves normal day-to-day activities like writing, drinking coffee and paying bills. Not really a radical intervention, but at least it broke up the monotony.

It’s with this problem—and perhaps, challenge—in mind that HOMO RIOT shows his self-titled exhibition at Bert Green Fine Art, a gallery located in the downtown business district of Chicago. The street artist decided to practice under the guise of HOMO RIOT starting in 2008 after Prop 8 passed. He was pissed, and took to the streets to express it. Not that this is a new concept—ACT UP operated under a similar strategy in the 1990s, taking their queer rage out in the public eye. Its sole purpose: political action for queers! And much like HOMO RIOT, ACT UP used all caps, acted collectively and radically, and didn’t claim their mission as something one person should take credit for. HOMO RIOT’s street art is activism for a new gay age, and this concept is compelling. His work at Bert Green Fine Art, however, seems to contradict his activist stance. He shows a collection of eleven limited-edition silkscreens, each named after a place where gay men cruise. Each image stands on its own, combining a street-art graffiti aesthetic with playful drawings of men—pissing, wearing masks, kissing—and images of cocks and ripped bodies from vintage porn magazines. Yet the very fact that HOMO RIOT is selling these works doesn’t really seem radical. Did the queer street art movement already sell out? Then again, even radical artists need to make a living. Follow @thehomoriot on Twitter for more. (Alicia Eler)