Throughout his career as a world-class photo artist, Luis Gonzalez Palma has always done what it turns out he had to do—register in tellingly emotional photo-works the state of his soul or, if we prefer to be naturalistic, his psyche. He went through Central American nationalism (Guatemala is his base), critical Catholicism, troubled masculinity, and existential agony and absence, to name just a few of his transformations, and now he has reached the point where the subjects of his sepia-toned tableaux express a uniform attitude of tight-lipped, harsh defiance—whether his model is male or female, strong or weak. It seems that Gonzalez Palma is saying that even though he knows that death faces us all, he will not be broken. In a repetitive triptych, a man sits at a school desk, with impenetrable mathematical formulas on a blackboard next to him, looking straight ahead, unwilling to submit to the enigma that existence has always been to him. This is not the last chapter. As long as Gonzalez Palma stays alive, he will surely continue to search for the light that has never yet come. 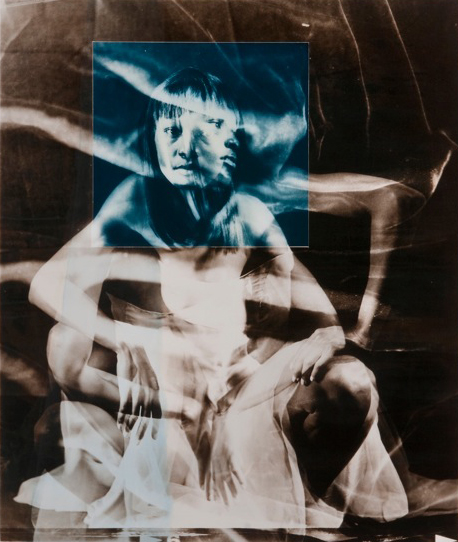 Rosemary Warner has been around the block more times than we can count and she’s still standing, still shooting and still commenting mordantly on existence, which has always been her passion and obsession. In her latest work, Warner has put into sepia and blue-toned photo-works images of people who convey the same attitude toward existence—a languor tinged with sadness that nonetheless conveys a sense that all is not lost, despite the ravages that the world inflicts from beginning to end. Take Warner’s most complex tableau, in which two blue-toned images of a young woman’s face, one defiant and assertive, the other reflective and accepting, are fused and placed in a square surrounded by a tangle of limbs that cannot be straightened, rendered in unremitting brown. All of Warner’s images are challenges to our complacency; life is a cesspit and it surely messes us up, but we remain as involved as we ever were, in and through all senses, until the end. (Michael Weinstein)