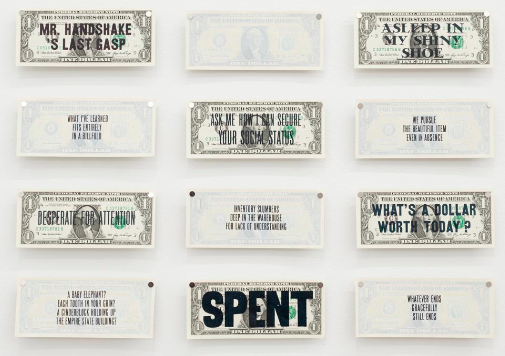 While the rest of the country was completely consumed by a bitter election that gained the dubious honor of being the most expensive ever at the cost of over six billion dollars, you would never know it if you took a trip around the West Loop galleries a weekend or two before the election. The art on view seemed blissfully unaware of the outside world to the point of bordering on irrelevancy.

The exception was Mark Wagner’s “Voting with Your Pocketbook” at Western Exhibitions, where the simple acknowledgment of the events beyond the gallery walls felt like a breath of fresh air. Framing itself as “an exhibition of money art,” the work uses the dollar bill as its medium, which Wagner then collages, paints or draws over.

At other times and in other situations using the dollar might feel a bit facile and gimmicky; and though doubt never entirely disappears, against the backdrop of the election and disinterest of other galleries in current events, Wagner’s gesture comes off as both relevant and urgent. Indeed, the artist winks at art’s perennial detachment in several works. Looking like a conceptualist work from the seventies, “Ink Value Study” builds to full black-and-white over a sequence of six bills. Elsewhere, Twombly-esque scribbles and strokes appear atop their money medium. 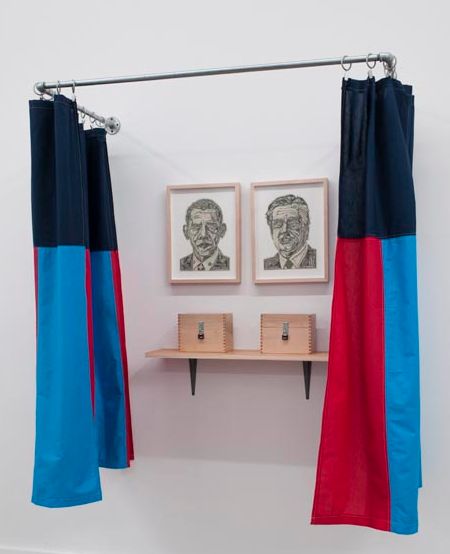 Mark Wagner, “Voting with Your Pocketbook,” 2012

Of course, the real appeal here lies in the real-world references, and those make up the vast majority of the work on view. The all-American slogan BEER BAIT & LOTTO constitute one work. Throughout the exhibition, numbers appear and reappear both in ordered and random sequences. These are complemented by works that repeatedly use bar graphs that demand associations from the viewer, whether they are a graphic equalizer on a stereo, recent stock prices and trade volumes, or the polling results that we’ve all become mesmerized by, thanks to Nate Silver.

Near the entrance to the gallery is a stack of (excellent) exhibition posters. A sign invites you to take one for a dollar, or just take one, it’s up to you. I took one and dropped a dollar into the nearby box, because I had a buck and, hey, what’s a dollar worth these days anyway? What can it buy? (Abraham Ritchie)