This is a collection of work that feels more experimental than successful, as the artworks query a cultural identity rather than build one.

Are twenty-to-forty- year-old North Americans of South Asian ancestry uncomfortable with the severe social stratification, upheaval and ongoing communal and gender violence indigenous to their homeland? Are they both attracted and repelled by its cultural traditions? None of that is too surprising.

But the incredible cultural diversity of that area will always be fascinating, and the curator, Kathryn Myers, has selected eleven artists, mostly from the northeastern United States, who exemplify a variety of diasporas within the greater South Asian diaspora. Most eye-catching, though a bit goofy, is Siona Benjamin’s fifteen-foot scroll depicting the Book of Esther. Just as Jewish artists have done in medieval France or modern Illinois, Benjamin has adapted a visual style from the surrounding culture to tell her own Jewish story. Less eye-catching, but just as interesting, are the sand mandalas executed by Tenzin Wangchuk, a Tibetan monk whose family fled the Chinese invasion. His work is probably quite useful for the meditative practice of initiates, though I find it dull and tedious. And then there’s the very delicate, bird-like abstract designs of Amina Ahmed, a Kutchi (Gujarat) Turk via Africa and later the U.K. The visual expression of Islamic  spirituality can hardly ever be seen in the Midwest, though her work falls short of its perfection. 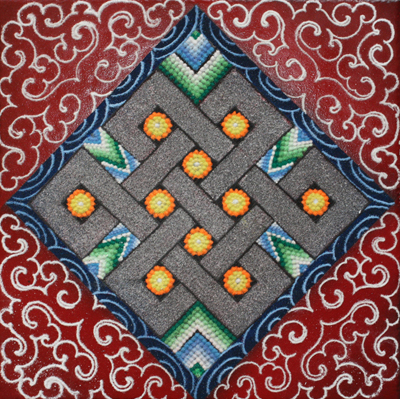 Most appealing to me, though also the most disappointing, is the dance video shot by Shelly Bahl. Classical Indian dance, and the music that accompanies it, is one of the great legacies of world art. It’s not just about being South Asian—it’s about being a strong, elegant, sensitive and sexy human, so it’s a delight to see it competently performed. But rather than reaching toward some kind of divine inspiration, this choreography feels out of place, like a partygoer who sits down at the piano and casually rattles off a few minutes of a Beethoven sonata.

Maybe the divergent cultural traditions of South Asia today can serve as no more than quotes or tropes in a postmodern dialogue. Or perhaps, as in Anish Kapoor’s “Cloud Gate,” it’s best when they are so highly theoretical they might as well have been ignored altogether. (Chris Miller)

Through December 15 at Gallery 400, University of Illinois at Chicago, 400 South Peoria