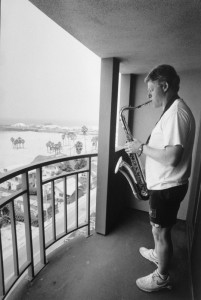 In this visual-buffet sampling selected from seven decades of images of American presidents taken by photojournalists (no official shots), the two panels that shouldn’t be missed target Barack Obama, and are more revealing than one might suspect, although all the pix are flattering. Sure, the photos of Barack and Michelle doing a slow dance “alone” in the White House, Michelle sleeping like a little cherub on Barack ’s shoulder, G.W. Bush and Obama all smiles after the latter’s first election victory, and the newly minted nominee taking the stage at the Democratic National Convention are pure schmaltz and hype—puff balls that the press likes to throw our way unremittingly. But when we see Obama in the situation room following the successful operation against Osama Bin Laden with his national security team, the president standing at a podium as Bill Clinton mugs uproariously, and Obama right before he will be sworn in for his first term, we see a different man who has more things to think about than burnishing his image in print and on the screen. In all of those photos, Obama is deeply meditative and intense, his eyes are shut—except in the situation room where they are steely—as he finds his center and marshals his strength and focus. The banner photo in the entire show is the one with Clinton, who is all lit up and front stage, while Obama stands to the side getting in touch with his core self, seemingly oblivious to anything else. To be able to perform such a feat is rare; this is a formidable guy. (Michael Weinstein)

Through November 25 at the Chicago Photography Center, 3301 North Lincoln