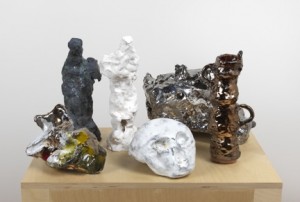 More is more in contemporary American ceramics: more color, more shapes, more textures, more references, more audacity; subtle understatement and minimalism have been left to the Japanese and the modernists. Spanish-born Xavier Toubes fits right into this hyperactive art world—except that his work just does not feel American, despite having lived and worked here for two decades. And despite a palette of strong primary and metallic colors, and a slurpy sense of formlessness, he just hasn’t been able to abandon that traditional European elegance so successfully realized in the eighteenth century. He hasn’t even abandoned the human figure, though he makes his figures fugitive and ghost-like. So if you take one of those complex, rainbow-colored Meissen porcelain centerpieces from the Art Institute and look at it through a funhouse mirror, you would get some idea of his work. It’s quite goofy—but also quite tasty, and its piles of melting forms and dripping colors remind me of an extravagant concoction of Italian gelato, piled high with delicious scoops of raspberry, lemon and chunky chocolate hazelnut. It feels like food art, or banquet-hall ice sculpture, except, of course, that it never disintegrates and you cannot take a bite. And I’m not sure you would want to put his pieces on the dining-room table anyway. They’re just a little too haunted and intense, and though just as extravagant as the imperial eighteenth century, there’s that sour postmodern aftertaste suggesting that something has gone terribly wrong, and our lives, though opulent and sensual, are just a big ol’ mess. (Chris Miller)