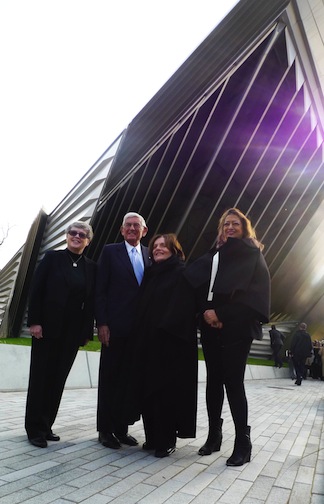 The brand new Eli and Edythe Broad Museum sits heavy yet gracefully on a nondescript piece of land at Michigan State University in East Lansing. At first glance, the Broad looks like a gleeful, corrugated shiny accordion or a fallen tower of cards. Some in the interwebs have already baptized it the “cheese grater.” If that’s the case, then it has to be the most pretty kitchen utensil ever built.  But don’t let its appearance fool you; this museum is destined to become a magnet for luxury tourism in the Midwest.

From the outside, the Broad looks smaller than it really is, but from the inside, it seems way bigger than the sum of its parts: 46,000-square-feet of massive concrete encased with pleated stainless steel and glass exterior. As one walks through it, the Broad’s skeleton appears to extend and fold through a series of pleats and weightless vectors. Many of its walls are angled (tilted at seventy degrees in some areas) forcing visitors to contort their bodies to look at the art in an experience that’s very much like panning through the curved walls at the Guggenheim in New York. This magnificently compact building is the second structure in the U.S. designed by Pritzker-award winner starchitect Zaha Hadid.

The Broad has been equipped with an impressive curatorial team headed by Michael Rush, the former director of the Rose Art Museum at Brandeis University in Boston. In charge of performances and public programs is Dan Hirsch, who most recently served as director of music programs for ArtsEmerson at Emerson College in Boston, and Alison Gass, who will be responsible for developing exhibitions and commissions of international scope. Her previous experience includes a stint at SFMOMA and being named by the New York Times as one of the top young curators to watch. But regardless of star power and cutting-edge infrastructure, it’s still not completely clear what the Broad’s real mission is going to be. What we know so far is that it will focus on rotating temporary exhibitions, but no galleries will be devoted to permanent display even though it inherits 7,500 historical objects from the Kresge Art Museum—formerly the art museum of MSU—founded in 1959.

I guess we’ll have to leave it up to Eli Broad, the Los Angeles billionaire philanthropist and somewhat controversial MOCA trustee who has become Jeffrey Deitch’s most vehement cohort in the past years, to decipher how to use his new toy. In 2007, Broad, an MSU alum that grew up in Detroit, gave the university $28 million to build the museum, as well as another $2 million for operations. The Broads also donated nineteen contemporary works to the museum, including Roxy Paine’s stainless-steel tress sculpture, “Containment 1” (2009), which stands nicely in the museum’s front yard. In 1991, the Broads also gifted MSU with $20 million to the Eli Broad College of Business and the Eli Broad Graduate School of Management, leaving their heritage in the region well-cemented for posterity. 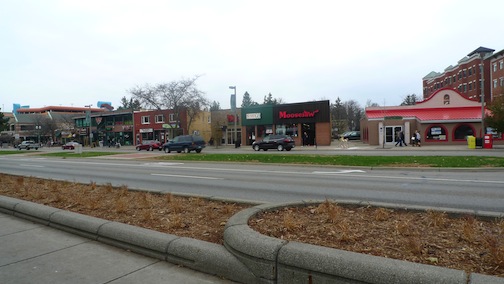 View across the street

However, one question remains. How will the nation’s pioneer land-grant university and one of the top research universities in the world play host to luxury cultural tourists in a town lacking an art scene? A few of the locals I spoke to are excited about the prospects. “We are optimistic that the Broad is going to be a game-changer,” said Tim Lane, the director of (SCENE) Metrospace, a cool alternative space founded in 2004 that’s perfectly located right across the street from the Broad. “We don’t really have an art scene here,” commented Lane, who also mentioned there is uncertainty regarding MSU graduates and where they will host their thesis shows now that Kresge museum is no more. Britta Urness, a professor at MSU and director of Milkmaid gallery, an alternative garage/basement space not far from campus, had similar feelings. Even though she is excited about the new venture and what it means for Lansing, she also explained that people usually have to travel long distances from places like Detroit and Grand Rapids to make it to her openings. She also wondered if these luxury tourists would even be interested in venturing outside the museum walls.

One thing the Broads know besides art is money, and how to make it grow. Certain studies by MSU and independent sources claim the museum is expected to attract up to 150,000 visitors to the area each year, with 30,000 new to Lansing, pumping $5.75 million per year into the local economy. At least, based on what I saw and the enthusiasm I felt during opening weekend, and seeing troves of people that gathered to see Hadid, I can attest Lansing is open to the challenge. However, there is still one problem challenging the region in attracting those projected 150,000 non-luxurious tourists per year, and that’s reliable and cheap transportation. 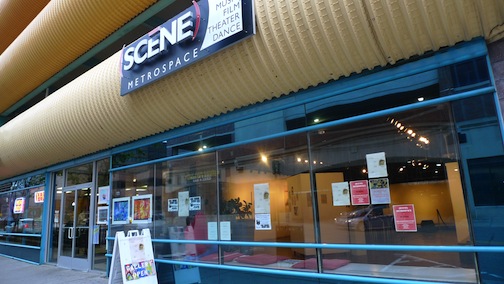 The Broad is another addition to an already significant group of cultural attractions along the Midwestern corridor between Chicago and Michigan, including the Detroit Institute of Arts, the Museum of Contemporary Art Detroit, ArtPrize in Grand Rapids, and the James W. and Lois I. Richmond Center for Visual Arts at The Gwen Frostic School of Art at Western Michigan University. Now imagine if Obama’s high-speed rail dreams came true and Chicago, the nation’s largest rail hub, finally had trains surpassing the turtlish speeds of about fifty-five miles per hour. Having access in a matter of minutes instead of long dead hours to a cultural center as rich as any of those metro areas in coastal America could really make the difference.