As the earliest visual expression of rational and democratic ideals, the art of the Greco-Roman world was cherished by the European civilization that overran North America a thousand years later and built the Neo-Classical temple of culture that’s called the Art Institute of Chicago. The Periclean golden age was well represented by casts of the sculptural frieze that once encircled the Parthenon—they can still be seen up near the ceiling above the grand staircase. A plaster bust of Athena was hung above the front entrance on Michigan Avenue. 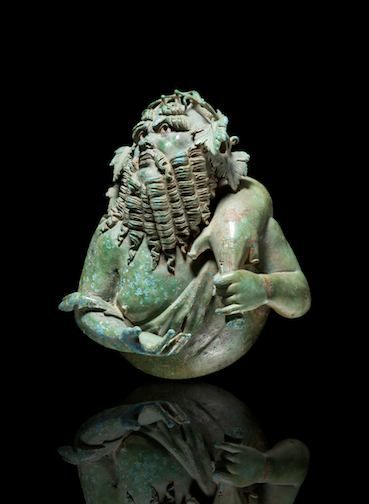 Surprisingly enough, the original marble of that same bust now greets visitors at the entrance to the new Jaharis Gallery of Greek, Roman, and Byzantine Art. With more than four times the floor space of the previous Greco-Roman installation, does this mean that our local museum is returning to its classical roots? Or is that culture just one more chapter, albeit a much longer one, in an encyclopedia of world art? A significant change may actually be taking place. Not only has a Super-PAC-sized chunk of cash—ten million dollars—been thrown into the project by the Jaharis family, but it is being guided by dynamic curatorship. This is not a one-and-done installation, like the gallery of South Asian art at its doorstep. Nearly half of the space has been filled with 150 pieces loaned from a variety of public and private collections. There’s an incredible display of figurative glass, silver and ivory work from the late-Roman and early-Byzantine period, on loan through August from the British Museum. This includes the Pagan/Christian Projecta casket and several other silver pieces from the Esquiline Treasure. Then there are dozens of pieces, mostly Roman marble portraits, on loan from the Getty for the next four years. None of them are great sculpture, but they do make the exhibit come to life with that magnification of the individual that our modern era shares with theirs. Most surprising are the pieces from anonymous private lenders, including the above-mentioned bust of Athena, as well as monumental sculptures and a first-century Roman relief of three satyrs strangled by a serpent that matches the description of a piece once owned  by Lorenzo de Medici. What will happen in all that gallery space when these loans expire?  That’s the exciting part, because this may be the beginning of a periodically rotating display of classical art, as its curators must dream up new themes and hustle up new loans and donations every few years. The sleepiest corner of the Art Institute is coming back to life. (Chris Miller)

Ongoing at the Art Institute of Chicago, 111 South Michigan