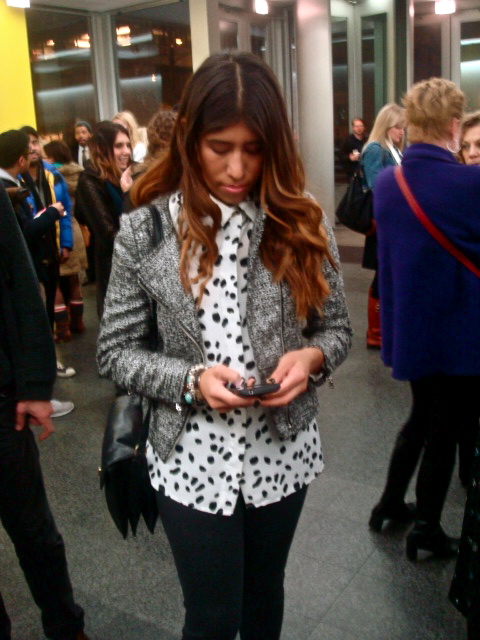 Elisabeth Diaz at the MCA’s party for The Sartorialst

Chicago’s fashion and streetstyle scenes have the same self-image problem as its art world. Both are slowly overcoming such anxieties as they gain confidence. Last week at the MCA, at The Sartorialist’s book release and Burberry’s opening party, Chicago’s fashion avant showed they can throw down the looks as Chicago develops a broader fashion consciousness.

The Sartorialist is an internationally beloved streetstyle fashion blog run by Scott Schuman, who globetrots and captures the best dressed in their best “fashion moment.” Although he spends much time at international fashion weeks and European capitals, the photos Schuman elaborated on celebrated beautiful yet anonymous moments of lived fashion. After a long absence from the Web site, Chicago returned to The Sartorialist through a pretty face on State Street.

MCA art curator and fashionista Naomi Beckwith was in conversation with Schuman but did not seem interested in examining Chicago as a fashion arena despite her rising star. Named Best Dressed in 2012 by Chicago Social magazine, Beckwith was then featured in Burberry’s Art of Trench ad campaign. Beckwith partied with a velvet-rope crowd at Burberry’s opening party later that week. The Burberry expansion is a show of confidence in the Chicago market.

Indeed, fashion is a market. Columbia College merged its fashion design and fashion business programs to “produce graduates with design skill as well as business savvy.” The School of the Art Institute of Chicago has an elite reputation that produces designers who immediately depart to Los Angeles or New York. With a limited selection of companies to work with and few of real prestige, designers who choose to stay must set out on their own with under-equipped business skills. The City of Chicago has tried to fill that void with programs like the Chicago Fashion Incubator, which takes six designers and teaches brand development, financing and business plan development in a year-long program that concludes with a runway show at Chicago Fashion Week.

Streetstyle and urban fashion culture are flourishing with goth and neo-grunge parties in Humboldt Park, one big vintage social in Logan Square and Wicker Park, posh-chic on Oak/Rush Street, raw South Side rap culture along with a rich multicultural undertone throughout the entire North Side. Can Chicago seize the moment to develop a fashion identity through the intersection of all styles in the creation of a genuine new aesthetic? (Paul Kulon)