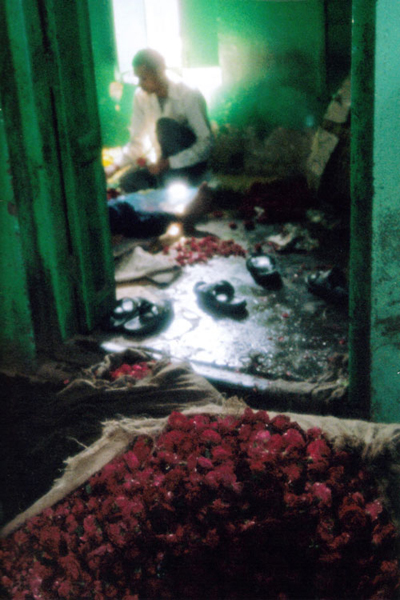 What happens when hardcore photographic pros get smitten with wanderlust and tote their gear to distant shores? They don’t take tourist shots, but there the similarity ends. Dianne Kittle could have stayed home; her color studies from various exotic places are so exquisitely composed and her human subjects so depersonalized that we are too consumed by the images’ formal perfections to focus on their representational content. The opposite is the case for Judith Petacque’s African street shots, which give the National Geographic style an injection of energy. Photo-journalist Jose More strikes a balance between form and content in his street shots from around the world; in the banner shot of the show, More captures a busy shadowed subway entrance in St. Petersburg, Russia, dominated by a nearly silhouetted street performer flanked by throngs about their business, most notably a silhouetted businessman with his briefcase looking like the essence of existential angst. In contrast to the street shooters, Barbara Levy-Kipper (India) and Candace Casey (UAE, Native Americans) zero in for intense close-up portraits of their subjects that, in Kipper’s case, give us the bite that a real person who has broken the personal space barrier inflicts; they are too individually real for comfort. And then there is Susan Aurinko, the only art photographer in “Around the World,” whose muted color studies of the old quarters of Indian cities are decidedly impressionist, as though we were enveloped by an alien sense of place. Unlike Kittle, Aurinko had to be there and surrender her senses to the scene. (Michael Weinstein)

Through January 4 at the Chicago Photography Center, 3301 North Lincoln