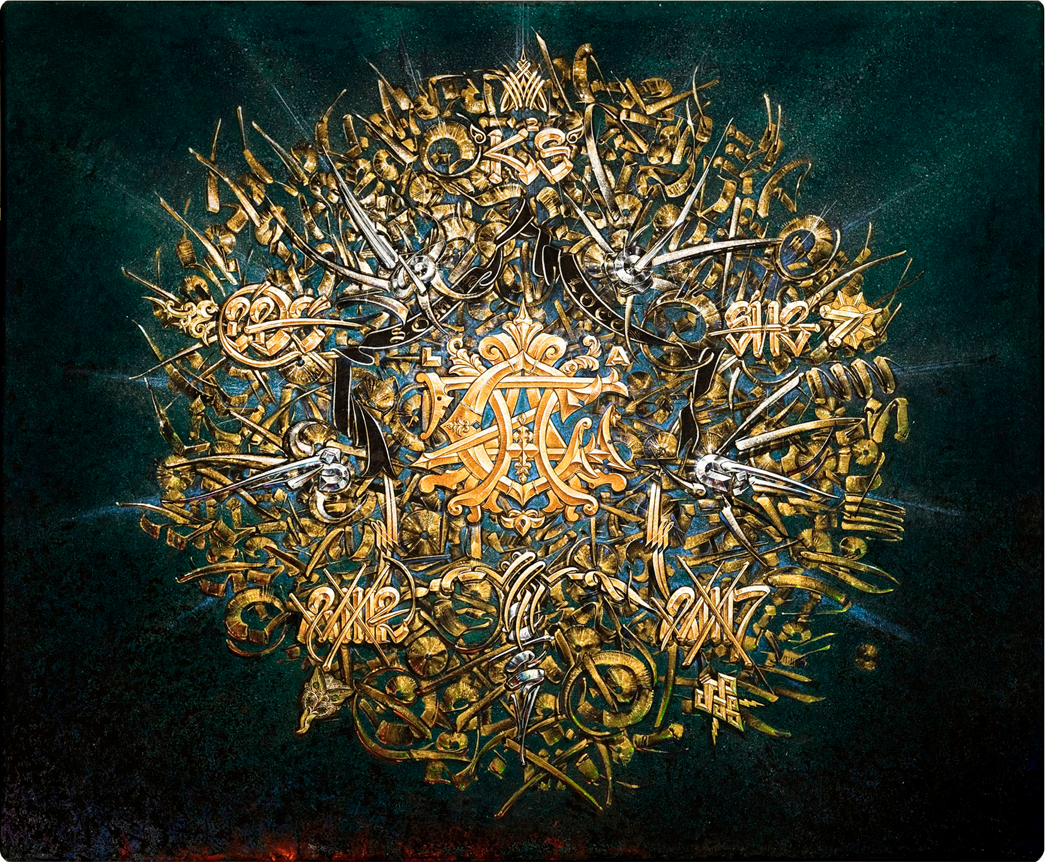 Chaz Bojorquez, born in 1949, was a cholo tagger in the 1960s, but he wasn’t just marking territory for street gangs in East L.A. He also developed a skull-in-fedora icon, Señor Suerte, that became a badge of honor for many young men whose prospects were limited to death or prison. Over the past decade, Bojorquez has applied that same talent to niche-marketed consumer goods, creating distinctive designs for wine bottle labels, skateboards, running shoes, headgear and such. But as this exhibition demonstrates, he has also made some very exciting paintings, especially in the 1980s and early 1990s when his calligraphy created a dramatic vision suitable for the popular science fiction or video games that pit a heroic, indefatigable individual against a cruel, over-industrialized dystopian world. This was all done with lettering, in the foreground or background, creating a tempestuous, atmospheric stage for life and death. The feeling is dark and heavy. If the artist himself does not suffer from PTSD, his paintings certainly do.  They’re as serious as a loaded gun, and it’s not too surprising that he only makes about two paintings a year these days. Death art has a long tradition around the world, from ancient Egypt to South Asia, and especially in the Central American cultures with which this history-conscious, well-educated artist is obviously familiar. One of his pieces is a defaced Mayan stela to mark the 500th anniversary of Christopher Columbus. Another is a crucifixion pose dedicated to his AIDS-afflicted brother. In several other paintings, he also delivers specific messages with recognizable words or figures, while his most powerful work is the result of just tones, and edges, and rhythms, like the Chinese calligraphy that he once studied. But his mood of hopeless yet defiant despair sets him outside both the Taoist and Christian traditions and is closest to the self-centered teenage angst celebrated by death metal music. With his personal icon at the center, his “Graffiti Mandala” of 1999 best exemplifies that pride of self—and the despair that self, like everything else, will soon turn to dust. (Chris Miller)