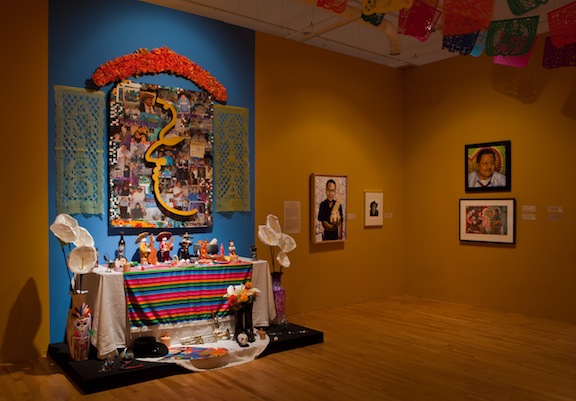 Francisco Mendoza (1958-2102) may not be remembered as a great American artist. He was devoted to the heroic style of Mexican muralism, but rather than confrontational and ecstatic, his public art was as gentle, friendly and ultimately forgettable as the elementary-school textbooks he used in his classroom at Cooper Elementary. But when you stand on the platform of the 18th Street el station and feel the whole neighborhood vibrating to the colorful, fantastic folkloric images in the murals he created there, you realize the impact of his contribution. He was helping to build a community, not just an art world, and many other artists from that community have come together at the National Museum of Mexican Art to celebrate his life as part of that museum’s annual Dia De Los Muertos exhibition. It’s hard not to feel the tingle of a very emotional event. Fourteen artists created various kinds of portraits, and four collaborated on an ofrenda, to honor this beloved character’s passage through life. His nephew, James Larralde, shares his uncle’s wide-eyed innocence, while most of these artists usually focus on the darker, more problematic issues of our time. But for this event, they all seem to have come under the spell of Mendoza’s benign spirit to create new pieces that are simple, direct, heartfelt and very well done. Hector Duarte has toned down his explosive energy to present a portrait of his friend as a thoughtful master craftsman. Another leading muralist, Robert Valadez, has presented Mendoza as some kind of patron saint. The Nicaraguan Carlos Barberena presents him as a people’s hero in one of the sharpest, strongest linocuts I’ve seen from contemporary graphic artists. And Rene Arceo, who spent a decade working for the Mexican Museum, beautifully imagines “Pancho” among the immortals of the Mayan pantheon. I’m sure that Mendoza would have preferred to keep on living in  Pilsen, teaching its children, and covering its walls with ebullient  murals and mosaics. But this is a memorial nearly worth dying for. (Chris Miller)

Through December 16 at the National Museum of Mexican Art, 1852 West 19th