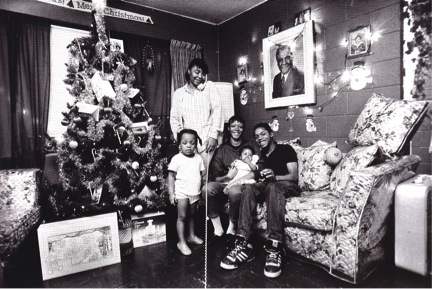 1987 was a black-and-white Christmas. The tree sparkled with tinsel. They posed, smiling, under a portrait of Harold Washington, the first black mayor of Chicago. Linda, Latrice, and Mario, Cabrini Green, 1987.

The photograph by Marc PoKempner was exhibited in April 1989 in one of the largest documentary photography projects ever organized in an American city: “Changing Chicago.” The Focus/Infinity Fund, founded by former Car-X muffler salesman and self-taught photographer Jack Jaffe, commissioned thirty-three photographers to create a portrait of the dynamic, diverse and divided city of Chicago.

Seven photos from each artist in the archive are currently on view in the print study room at the Museum of Contemporary Photography as part of artist Jan Tichy’s introspective intervention of the museum’s entire collection. “Changing Chicago,” itself a sprawling documentary project, captures the glitz of society balls, the red neon of Superdawg’s drive-in, the construction gang raising the steel skeleton of 900 North Michigan, a sidewalk card game on 63rd and Greenwood, and an old woman in her yellow curlers at Barbara’s Beauty Salon, among other scenes of city life. Tichy responded to the legendary project by adding seven videos of contemporary Chicago, documenting his own love for the city of iron and steel. 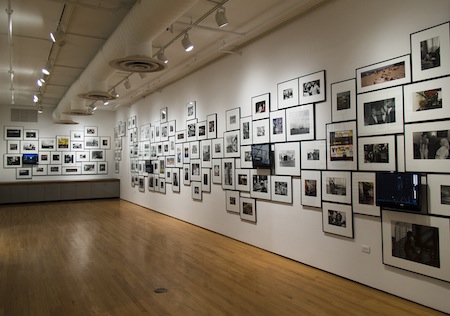 Changing Chicago installed at the MoCP

Jack Jaffe organized the “Changing Chicago” project to revive an interest in photography as a catalyst of social change. “Did I believe photography could effect social reform? No.” explained Marc PoKempner at a recent panel discussion that reunited several of the project’s original photographers. “But I did think I could correct a prejudice that I myself had participated in as a photojournalist. I’d been in the Cabrini-Green Projects often on news assignments, always shooting crime or tragedy, and I regretted the impression I was conveying that people in public housing were really some other kind of people.”

In “West Englewood, 2012,” Tichy challenges the single narrative of violence promoted by the news media. The video captures an afternoon in late September. Light fades on a street corner, just like any other in the city. The wind moves softly through the dark trees. Kids chase a ball into the street.

Over the past five years, Tichy has collected the clippings from the RedEye’s tracking of homicide rates in the city. By compiling the data and connecting disparate red dots, he arrived at the most dangerous intersection in Chicago—65th and Hermitage.

“I live on Hermitage and Mayor Emanuel lives on Hermitage,” Tichy reflects. “Obviously these are very different Hermitages.” The Chicago grid highlights the disparity between black and white neighborhoods. “The grid allows you to live on the same street but in two very different worlds.” (Annette Elliot)

The Changing Chicago Project is part of 1979:1-2012:21, Jan Tichy Works with the MoCP Collection, on view through December 23 at the Museum of Contemporary Photography, 600 South Michigan.