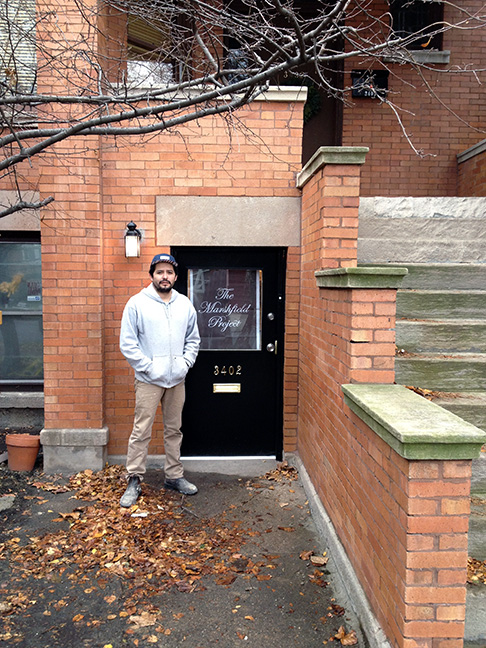 I asked for the grand tour of Juan Angel Chavez’s new gallery, and he outstretched his arms. “This is it!” he said with a smile, his fingertips just reaching either wall. The seventy-two-square-foot exhibition space, called The Marshfield Project, is the enclosed garden-level entryway to Chavez’s studio at 34th Street and South Marshfield Avenue in the McKinley Park neighborhood, adjacent to Bridgeport. It was co-founded with his wife, Jenna Leitner; upstairs is their home. The Marshfield Project is not, however, a conventional gallery for professional artists. Chavez presses this point. The inaugural exhibition this month will be Guadalupe Estrada’s debut solo show. She is Chavez’s mother.

The Marshfield Project was partially funded by the 3Arts Artist Projects grant program. It works a little like Kickstarter in that the artist names a project and fundraising goal, and supporters vote with their dollars, but 3Arts promises to contribute a third of the funds. Chavez and Leitner raised $3,170 with 3Arts’ help, for minor adjustments to the space and the publishing of a catalog on newsprint. 3Arts similarly funded Edra Soto and Dan Sullivan’s domestic exhibition structure, The Franklin, in the backyard of their East Garfield Park home on Franklin Boulevard. Soto’s father will have the second exhibition at The Marshfield Project, in February.

Domestic exhibition venues can operate with ultimate freedom, and if there are restrictions or limitations they are only self-imposed. Spaces such as The Marshfield and The Franklin need not always worry about the conflicts-of-interest that tend to tarnish the reputations of commercial and nonprofit art institutions. As a genre, domestic spaces even seem to welcome the idea of giving your mom or your friend’s dad their first exhibitions in a recognized contemporary art setting.

For her exhibition, Chavez’s mother will show her signature crochet flowers, which she adorns to knitted scarves and sells. Since it’s an art exhibition, though, Estrada plans to up the visual impact of her product by attaching the textile flowers to found branches, and over glass structures and an entire chair. Crocheting may be her hobby, but she’s also creative and passionate about it. “Before she goes to bed she knocks out a couple flowers,” says Chavez, implying that Estrada’s handiwork is not exactly easy, but she excels at it.

Choosing his mother to inaugurate the space wasn’t Chavez’s initial plan. The gallery was supposed to open this past October, and he lined up two artists to exhibit. They both cancelled, citing the pressure of exhibiting their work in the orbit of Chavez. He is an accomplished artist who teaches sculpture at the School of the Art Institute of Chicago, has solo shows at Linda Warren Gallery, was recipient of Driehaus and Tiffany artist awards, and has had solo shows at the Hyde Park Art Center and the Museum of Contemporary Art. This summer he’ll open a solo show at the Figge Art Museum.

Chavez does, however, intend to maintain The Marshfield Project as a platform for artisans—or, artists minus the ego. Passion is a key element of the exhibiting artists’ work, as is the enjoyment of their craft. Anything that’s creative “has to be fun,” says Chavez. This first year of programming has the thematic title of “Fire Keepers.” These are “people who are keeping the fire going for themselves,” says Chavez. And whether they call it art or not, Chavez wants to celebrate them.

Structurally and conceptually, The Marshfield Project is a natural outgrowth of Chavez’s art practice. More and more, he’s working less and less in the studio. He plans his projects there, but they’ve become so large that they need to be constructed onsite. Two years ago Chavez moved out of his beloved 2,000-square-foot studio in Pilsen for the smaller one in his basement. It’s mainly a small woodshop and office where he plans the models for his massive sculptural experiences. This year he completed “Scraping the Bowl” in southern Indiana with the New Harmony Gallery of Art. The sculpture comprised parts of an old wooden barn that Chavez burned in the field. The Marshfield Project, then, extends Chavez’s interest in inhabitable, immersive spaces and the materials of everyday life into a gesture of generosity to friends, family and other friendly creatives.

“We’re not going to do anything conventional,” says Chavez. He was inspired to build out a mini-exhibition space after touring Europe several years ago and seeing similar practices in Copenhagen and elsewhere. “I want it to be nice and comfortable and welcoming,” he says of the gallery. Since it opens in winter, he plans to install a fire pit in the frontyard as a gathering place for the community on his residential street.