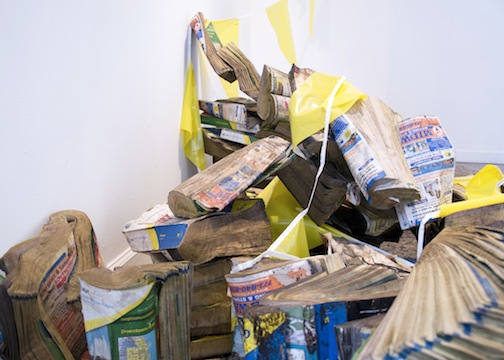 Before the first line, readers of Virgil’s quintessential epic, the Aeneid, know the foundation of the Roman Empire lies at the end of Aeneas’ quest, allowing them to contemplatively shuffle through the labyrinthine narrative and get lost in its lurid, poetic vignettes without losing track of the story arc. Visiting “Epic Something,” then, is like the first reading; and the search for its ultimate empire from within the works of thirteen artists presents something of a challenging journey. 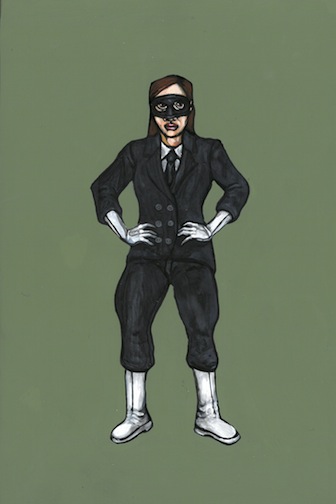 Collaboration by three minds could explain the muddled waters. The curators, Caroline Picard, Zach Dodson and Dan Gleason, were chosen by Jamilee Polson Lacy to curate this final installment of her “Quarterly Site Series” project, begun in 2010. I got the sense that Picard, Dodson and Gleason each had their own epic to tell and chose thirteen artists who are also apt storytellers, resulting in diverse plots branching off into multiple somethings, with threads too loose to form a captivating net. The exhibition presents provocative jumping-off points, from Heather Mekkelson’s bed of phone books, to Aay Preston Myint’s thought-map of queer politics, to two humorous video works by Irina Botea addressing politics and revolution while aptly sandwiching “Can you be aesthetic about politics?” written in crayon on the wall. While the experience with each of these artist’s objects is well worth the visit to the exhibition, the curators’ palpable desire for the exhibition as a whole to create magic brought on confusion instead. After spending some time in the space and creating multiple possible narratives, I began wondering whether the failure lay in “Epic Something” for not containing a cohesive curatorial statement, or in my own expectations for exhibitions to have a linear narrative. (Anastasia Karpova Tinari)

Through February 24 at the Hyde Park Art Center, 5020 South Cornell