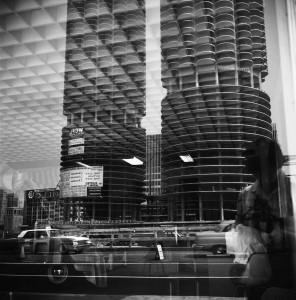 Self-Portrait, 1961. From “Vivian Maier: Out of the Shadows”/Jeffrey Goldstein Collection

She was the North Shore nanny who went viral shortly after her death. A once-in-a-generation “overnight” success story with all the elements of fairy tale: an unknown genius who made art for art’s sake, a lost “treasure” found when her repossessed storage lockers were bought at auction by photography collectors, a world that can’t seem to get enough of a Vivian Maier that it knows so little about.

It’s hard to believe it’s been only two years since her story exploded on the local, national and international scene, when the Chicago Cultural Center mounted an exhibition of her work and the accidental but priceless collection of John Maloof became a central part of the narrative.

But with all the attention over how her work was discovered and brought to light, little was known about Maier herself, other than the recollections filtered through a few of her onetime wards. I went to the launch party for Richard Cahan and Michael Williams’ new book about the photographer, “Vivian Maier: Out of the Shadows” last month and, like the rest of the standing-room-only crowd, was captivated by their description of the challenges they faced in reconstructing the life story of someone who spoke volumes in images, but was virtually silent in words. We recently had an email conversation to discuss the singular phenomenon that is Vivian Maier. 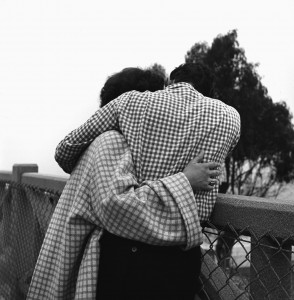 Chicago, circa 1960. From “Vivian Maier: Out of the Shadows”/Jeffrey Goldstein Collection

The story of Vivian Maier is one of those stranger-than-fiction things. Both in the scope, quality and anonymity of her work, but also in its dramatic discovery. Has there ever been a story like Maier’s?

When we first heard of Maier’s story, the photographer who immediately came to mind was Mike Disfarmer. He was an Arkansas man whose photo studio work was uncovered in 1974, many years after his death. Disfarmer’s compelling portraits were never collected or exhibited during his life, but now his work is in the Museum of Modern Art and has become extremely collectible. This took decades. Maier’s improbable rise, however, has been aided by the Internet, which made her an international phenomenon practically overnight. Soon after her images were posted online they went viral—shared on websites and blogs around the world.

Describe the genesis of your project. You call it a photo memoir and have gone to considerable length to document the life of Maier. Since she was such a private woman, was it especially difficult to do this?

Our book proceeded on two tracks: one was fueled by interviews with those who knew her, the other by the enormous amount of photographic material she left behind.

Unfortunately, even though we located many people who knew Maier, she never spoke to anyone we found about her photography—not even those who knew her best. So the reasons why she photographed might never be fully understood.

But we learned much about Maier through her photographs and negatives—how she worked, what she was attracted to photographically, and perhaps most importantly what her daily life was like. She was not a traditional photographer like Ansel Adams, who would plan photo trips weeks or months in advance and create a body of work to be published or exhibited. Instead, she put her camera on every day and photographed her world—a trip to the doctor, grocery, or school plays for the kids she cared for. That is why we called it a “photo memoir.” They serve as a diary of her life. 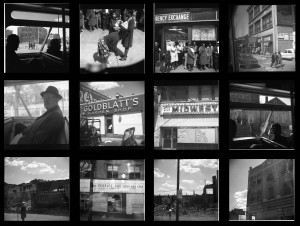 Contact sheet, West Side Riot. From “Vivian Maier: Out of the Shadows”/Jeffrey Goldstein Collection

Did she leave any written correspondence behind? Journals, letters, anything?

We don’t think that Maier left much written work behind. We know of one letter she wrote during the early 1950s. She did leave little scraps of paper with her negatives (some in French) that have helped us find people she worked for and people whom she knew.

Some of your sources are photo-shop owners and clerks, reflecting an almost detective-like process on your part.

We contacted absolutely everybody we could find—but we know there are still people out there who have stories to tell. Vivian Maier lived a rich, long life, but left few clues behind. She relished being something of a mystery during her life. We filled in many missing pieces, but she remains a mystery today and might remain a mystery forever. 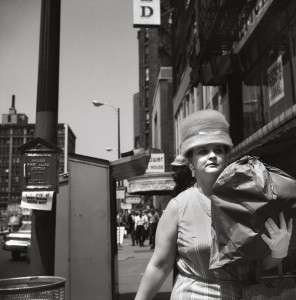 Chicago, circa 1961. From “Vivian Maier: Out of the Shadows”/Jeffrey Goldstein Collection

You went to France, where she spent time a very long time ago and yet were able to find evidence of her presence there?

We traveled to France with Jeffrey Goldstein, the owner of about 18,000 Maier prints and negatives, figuring we would just find a few traces of young Vivian. Were we wrong!

Maier lived in a tiny village in the French Alps as a young girl from 1932 to 1938, so the people who remember her are in their eighties or nineties. Philippe Escallier, a Vivian fan who owns a home in the area, lined up many people who vividly recall young Vivian from those years. We met her neighbors, her schoolmates and visited her apartment and her school. We also met many people whom she photographed upon return trips to France in the 1940s and 1950s. Goldstein gave them a huge cache of photographs that she took in France. Escallier and friends have identified the people and locations in almost every picture. The people of the Champsaur Valley—like those in Chicago—are very proud of Maier.

She worked as a nanny for affluent families on the North Shore. In your book you document a prickly personality, but years later, at the end of her life, the Gensburgs took care of her. Why? Did they see her as an artist or just a dear caretaker?

Maier worked for the Gensburgs for about sixteen years, and she became an important part of their family. They loved everything about her—she was truly Mary Poppins to the boys. Mrs. Gensburg, an artist herself, sensed that Maier was an artist from the moment they met. But their fondness for her goes beyond that—it is on a very human level. They understand that life got difficult for Maier as she grew older and that other people saw her in a different light. But that did not diminish their love for her. They should be greatly lauded for their effort to help take care of Maier during her later life. 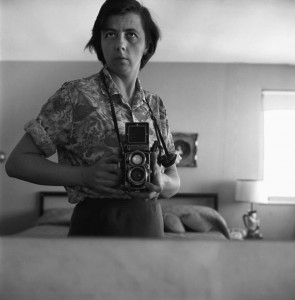 Self-Portrait 1965. From “Vivian Maier: Out of the Shadows”/Jeffrey Goldstein Collection

Do you think she ever tried to make a living as a photographer? Did she show her work to curators or editors?

We found no evidence that Maier worked as a professional photographer or ever tried to sell her photographs. It’s also worth noting that Maier rarely printed her negatives. While she took an estimated 120,000 images, she left behind only a few thousand prints, most of which were small snapshots taken in the 1950s. No portfolio or formal exhibition prints were found among her possessions in the five storage lockers that were sold.

Talk about the “Vivian Maier business” today. Who owns the major collections and what’s happening with them? Are museums getting involved?

There are three major collectors, all in Chicago, who own all of Maier’s work today. Two of those collectors, John Maloof and Jeffrey Goldstein, have exhibited her photographs in leading photo galleries in the United States and around the world. Both have dedicated much of their lives to this task, and it’s fair to say, at great expense. The time spent archiving and digitizing the collections has been overwhelming, but it must be satisfying as well. We admire their work.

Goldstein, in particular, made this book possible due to his remarkable spirit of sharing the photographs and the research he has done over the past two years. He truly believes he has a major responsibility in passing the work down to future generations, and asked us to help. He also provided images for “Vivian Maier’s Chicago,” an exhibition of large-scale photos at the Chicago History Museum that runs through the summer. Here you can literally walk through a maze of life-size photos showing the Loop of the 1960s and seventies.

Is Vivian Maier more than a curiosity? Will she become a permanent member of the pantheon of great twentieth-century street photographers? 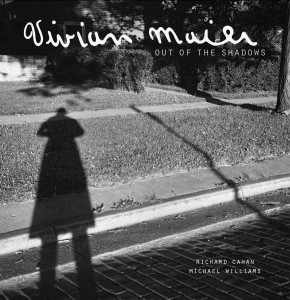 The Maier phenomenon has created a problem for the photographic establishment. Traditionally, the road to the top for photographers is slow—small museum and gallery shows over the course of many years. It can even take decades. Maier’s rise happened practically overnight, and while the world has embraced her work, the establishment is much more cautious. It will take time. She also left behind few prints, which has traditionally been part of a photographer’s largess.

That said, she already has a place in the photo world. There are Vivian Maier street photography clubs all over the globe. We have received orders for “Vivian Maier: Out of the Shadows” from as far away as Thailand. Maier is an artistic force—inspiring people by her work and her life. Many of the world’s most prominent photographers, including Mary Ellen Mark and Joel Meyerowitz, have lauded the work. But we most like the description from a Maier fan online who called her “The People’s Photographer.”