1. The Museum of Contemporary Art 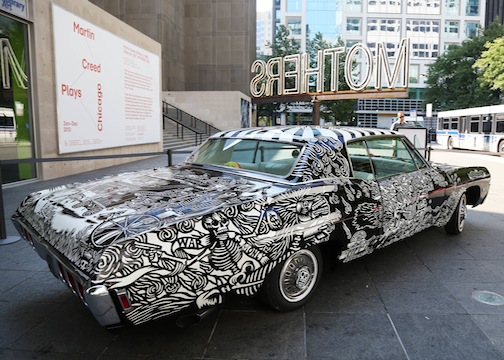 From Heidi Norton’s impressive glass herbariums of common houseplants buried in layers of colored wax to an accessible yet highly competent, and somewhat melancholic, revisionist survey of art made during the culture-wars era in “This Will Have Been: Art, Love & Politics in the 1980s,” the MCA has placed itself right at the center of the national conversation. And they have done it by transforming what used to be a forgotten elitist institution into an exemplary multicultural operation. It seems the MCA can turn anything it touches into gold these days. Think of satirist Jayson Musson and his first-ever museum performance or the urban excitement produced by Martin Creed’s public kinetic sculpture “MOTHERS,” which has become the most talked-about piece of public art in this city since the dreadful Marilyn—in a good way, of course. I wouldn’t be surprised if in a few years from now the MCA is leading the pack. Follow their addictive Twitter handle @mcachicago, which is one of the coolest among all the other museums in the nation.

2. “Nayda Collazo-Llorens: An Exercise in Numbness and Other Tales,” curated by Don Desmett at the James W. and Lois I. Richmond Center for Visual Arts at Gwen Frostic School of Art in Western Michigan University.

The unknown dangers of Lake Michigan, intimacy in the age of immeasurable social media activity, and a heartfelt extrasensory conversation between two lovers during a turbulent flight were only a few of the themes dissected by Nayda Collazo–Llorens in her Herculean, almost puzzle-like multimedia exhibition. In the monumental installation “Unfolding the Triangle: Lake Michigan One,” the artist created an epic narrative of UFO sightings based on a legend that implies Lake Michigan has a zone as dangerous as that of the Bermuda Triangle in the Caribbean: A place of ghost ships and strange disappearances. Sketchbooks attached to walls gave deeper insights to Collazo’s ramblings and conspiracy theories, which were made even more poignant by an overall mood of hermetic isolation, provoked by the ambient sound of water, that’s comparable to the kind of feeling one gets when submerged underwater.

Last year the Milwaukee Art Museum acquired Isaac Julien’s “Expeditions” trilogy, (2004–2007). I had a chance to see part one, “True North,” which is a beautifully photographed three-screen immersive experience based on transcripts of the Arctic discovery and the story of Matthew Henson, the black engineer who accompanied explorer Robert Peary to the North Pole in 1909 and who claimed many years later that he had reached the Pole before Peary. In Julien’s meditative narrative, actress Vanessa Myrie plays Henson. She walks through vast white spaces, melting crevices, ice fields and through a chapel made of ice. In one scene she washes her hands on a fancy hotel faucet, and as the image dissolves into that of her hands caressing ice, the voices of Inuit throat singers swirl around while the screens synchronize to show one long panoramic view of the icy region. You still have a chance to catch the third chapter of the narrative, as “Western Union: Small Boats” will be on view until February 17, 2013.

In case you haven’t heard, The Broad is a brand new museum located at Michigan State University. Designed by Zaha Hadid, it resembles a corrugated shiny accordion. (We covered the grand opening here.) However, you don’t have to dig its looks if you don’t want to as long as you pay attention to what’s stored inside of it. Take “Global Groove” for example; it celebrates video art by offering a comprehensive and fun overview of current examples of the genre. My favorite was “Comb” (2008) by Chinese artist Li Ming. It shows a hydraulic excavator breaking through walls and dangerously combing a woman’s hair with its steel grapples.

If this was meant to be Hickey’s last hurrah, then we can say he went out with a bang. When I met the man he talked about retirement, the vicissitudes of writing his new book “Pagan America,” and the fact that, according to him, Chicago is the best city in America to display public art. Needless to say I’m still star struck. The show is always open to the general public and you can visit at any time of the day or night. It has an all-star lineup including sculptors Almond Zigmund, Nancy Rubins, graffiti artist Gajin Fujita, and a thirty-foot-tall Roy Lichtenstein sculpture.

With titles like “Ghost Vomit” and “Scatology,” how can anyone go wrong? Elijah Burgher makes intricate colored-pencil drawings of sigils, emblems, the occult and plain-looking naked men conducting strange rituals in cheap motel rooms. I’m under the impression that Elijah’s amateur magicians always fail to establish a spiritual conductor to the other side, but at least they get a sexual high out of trying. 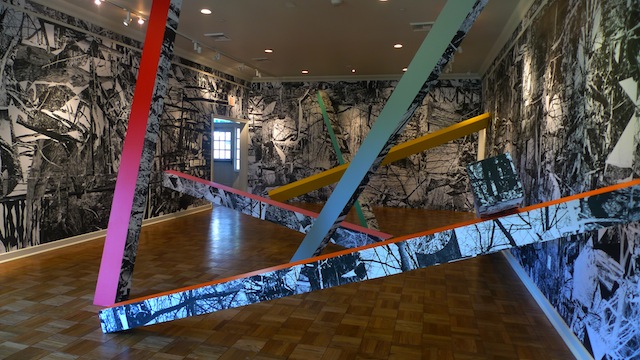 What is installation camouflage netting? Ask artists Santiago Cucullu and Ester Partegàs, who investigated the paradoxical relationship between the seemingly natural environment of the Lynden Sculpture Garden in Milwaukee and the industrial sculptures installed within it. Their collaborative installation consisted of wallpapering a room—overlooking the garden—with layered patterns of fallen trees and other foliage. And bisecting the room from floor to ceiling were a series of fallen pillars or barricades. For those who don’t know, the Lynden Sculpture Garden was home to industrialists Harry Lynde Bradley and his wife Margaret (Peg) Bradley. They took the nearly forty acres of flat farmland and, with the help of Chicago landscape architects Langford & Moreau, created an English country park with rolling hills and a lake designed to match Harry’s childhood memories growing up in Kansas City. In 1962, Peg began collecting monumental sculptures, often inviting artists to Lynden to install their works. The collection includes Alexander Archipenko, Henry Moore, Barbara Hepworth, Tony Smith, Mark di Suvero and many others. Harry was an avid tree collector; his trees still grow at Lynden.

8. “Feast: Radical Hospitality in Contemporary Art,” at the Smart Museum of Art, University of Chicago 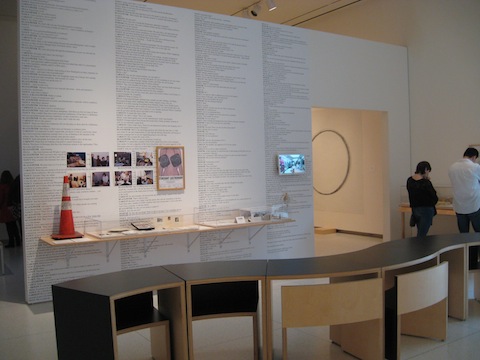 Thanks to relational aesthetics, sharing food and drinks is an integral part of the art experience today. But as an artistic medium, sharing food has been a thing since the 1930s, from the Italian Futurists to Alison Knowles’ “Identical Lunch” in 1971. Not being a fan of food art, I was a bit apprehensive coming into this show, but the encyclopedic nature of it and the inclusion of important artists like Mary Ellen Carroll, Theaster Gates, Tom Marioni, Michael Rakowitz, Ayman Ramadan, David Robbins and many more, made me a believer.

Few artists in Chicago open their studios to the general public, which is weird since most artists in this city have no gallery representation or outlet to show their work. Robb Stone did and he made an impact on me. His paintings address sexuality, homoeroticism and violence as seen through the eyes of media. Stone consumes that information, filters it, and then spews it in images that, even though are colorful, have been erased in certain areas with Clorox. You can’t see the faces of his victims, contractors in Afghanistan and soldiers, which really are the perpetrators in the other side of the world. I see his work as political art but he calls them  “homoerotic tableau vivant.” Maybe we can agree that he is exorcising the violent nature of men through eroticism. 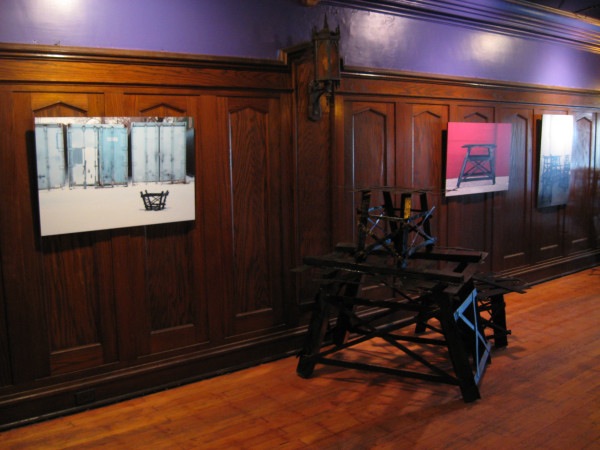 Artists make the best critics, and vice-versa. Robin Dluzen is a young artist and critic on the rise. Her interest is employing salvaged cardboard to construct water towers, power lines, and other mechanized structures of infrastructure. In essence, she is making drawings with sculpture. Sometimes she photographs those sculptures next to architectural oddities. Her installation of dozens of those cardboard entities at Charnel House, formerly a chapel, brought up the dingy and dark nature of austerity. Things we can’t see in plain sight, the infrastructure under our feet, is slowly rotting and, even when we refuse to see it, those things can kill us. A perfect metaphor for our times.

11. University of Illinois at Urbana-Champaign MFA Show 2012, at the Krannert Art Museum in Champaign, Illinois 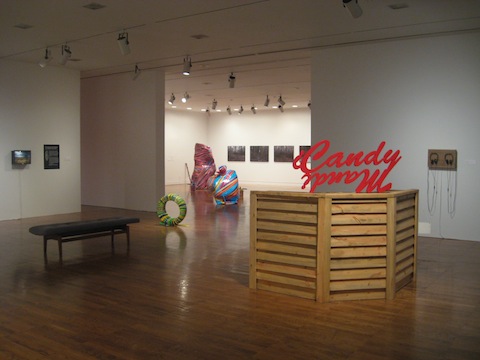 The way in which success is measured at the graduate program of the School of Art and Design at the University of Illinois in Champaign-Urbana, located in the middle of the cornfields of Illinois, is not quantity but quality. It is a three-year research program where only a handful of students must demonstrate they have the capacity to make stuff. In other words, craft is as important as concept. Therefore, their MFA shows are always a delight to see. This year’s standouts were Nicki Werner, Maria Lux and Michael Woody. Look them up; they’re about to make waves.

Other standouts from 2012 include: Alex Chitty’s photographic manipulations and cut paper sculptures at Alderman Exhibitions; Tom Burtonwood’s wall-paper design (and downloadable font) installed at the 21st Evanston and Vicinity Biennial 2012 at the Evanston Art Center.

Also, “DRUCKWORKS: 40 Years of Books and Projects” by Johanna Drucker at The Center for Book and Paper Arts at Columbia College. The beautiful paintings of animals enclosed in speech bubbles visualizing other animals by David Reninger at Linda Warren Projects; and process art taken to the limit through the construction of free-standing window frames filled with bricks and charcoal rubbings of unused spaces by Lourdes Correa-Carlo and Fatima Haider at Julius Caesar. And last but not least, nods to SideCar gallery in Indiana for showcasing some of the most promising stars from the scene with the likes of Claire Ashley, Paul Perkins, Merchant Adams and Casey Murtaugh.

[…] of 2012 also came in from the hinterlands: bmoreart reported on Baltimore’s best exhibitions, Pedro Velez at New City reported on Chicago, MNArtists.org listed Minnesota’s best of 2012, and the LA Times wrapped up their year with a […]

[…] Cotter in New York, Christopher Knight in LA , the Guardian’s writers in Britain and beyond, also Chicago, Glasgow, Philadelphia, and the best worldwide from ArtForum Slant and […]