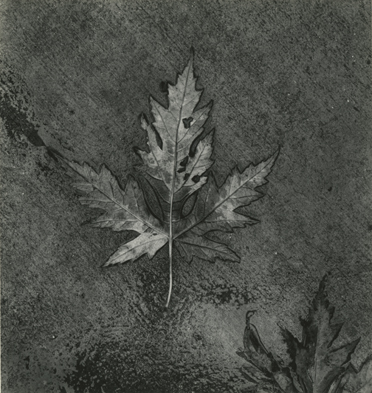 After a long and illustrious career that still continues, as a major member of the gifted late-modernist generation of Institute of Design photographers, including Barbara Crane and Ken Josephson, Joe Jachna now shows his earliest work, in which the balance of his aesthetic is reversed from what it became. Jachna has become known as a Zen photographer of wooded nature whose images capture his subjects exquisitely and make us fix on them rather than on the artistry involved in making the images. At the inception of his vision, Jachna was focused on nature, but he appropriated it to create black-and-white small-format studies that emphasized the play of photographic values, such as light, tone, and texture. In this work, from the late 1950s and early 1960s, Jachna deployed a multitude of strategies, each one emphasizing a photographic quality, while always making sure to preserve the subject ’s power. There can be an effect of intense pathos when he succeeds, as in his study of a decaying leaf resting on a striated stone surface; the eye moves back and forth between the dark grooved setting and the highlighted complex leaf. As Jachna matured, nature itself triumphed over the effects of its representation, and he learned to represent that new state of sensibility. (Michael Weinstein)