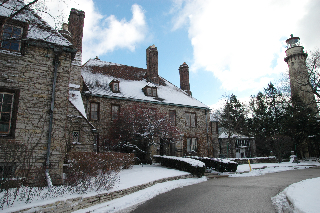 A crumbling old mansion beside the lake seems more befitting of an Edgar Allan Poe tale than a community art center, but it has been the Evanston Art Center’s home for the last four decades. The City of Evanston owns the Harley Clarke Mansion and decided to market the 20,275-square-foot residence, which sits on a large property, in 2012. Last month the city acknowledged a bid from billionaire investor James Pritzker, as reported by Crain’s.

Where does this leave the eighty-three-year-old art institution? For most of its existence the EAC has made do with very little. At one point it occupied a library’s basement, and then an abandoned barbershop, and then leased the lakeside mansion for a token $1 per year.

The EAC’s executive director, Norah Diedrich, considered her options: aggressively fundraise in order to stay in a building that is structurally inadequate for an art center’s needs, or locate a new facility and potentially modernize the art center into a thriving community resource. Diedrich and the EAC’s board of trustees have chosen to relocate.

Diedrich became the EAC’s head in 2009 and says a facility upgrade was on her to-do list but the city’s swift move to sell the property surprised her. The EAC’s lease was formally dated to expire in 2021. Diedrich says the EAC has been fortunate to reside in the mansion, and she notes that Evanston’s city council is helping to facilitate the art center’s next move.

Diedrich and her board are acting fast. They’ll need to vacate the mansion by the end of 2013, if not before. Diedrich has already initiated an “outlooking” phase. She’s consulted an architect, a real estate broker, a fundraising expert, and formed a capital campaign committee.

A short timeframe poses a challenge to a capital campaign because a facility renovation could be costly, and that would take time to fundraise. It took the Hyde Park Art Center, for example, three years to raise $6.3 million for a renovation completed in 2006. The EAC might have just one year if it intends to keep its programming seamless.

But the future stability of the art center doesn’t simply hinge on finding a new home. To assure its longevity the EAC needs to elevate its public image. The quaint mansion hardly signifies a place where newcomers can participate in creative, experimental cultural offerings—even if the EAC has long welcomed all who have walked through its doors.

High visibility in a busier part of Evanston and easy access to public transit rank very high on Diedrich’s checklist of priorities for a new facility. “We want to be in the thick of it,” says Diedrich.

More than foot traffic and curb appeal, though, Diedrich wants the EAC’s offerings to be relevant to local citizens. A dynamic integration with community life could assure the success of all regional art centers. “Art is very rich and alive,” says Diedrich; “it’s not a spectator sport.” She looks to the Yerba Buena Center, a prolific and prestigious sprawling multidisciplinary venue in San Francisco, as a model for the future of the EAC. “There’s no reason why we can’t do that here,” she says.

Strengthening its identity within the local art world may be key to assuring the EAC’s future vitality. For example, the Hyde Park Art Center solidified its reputation as an innovator and contributor of important local culture with the Hairy Who? exhibitions in the mid-1960s. No such trademark immediately springs to mind with the EAC; however, the EAC isn’t lacking in prestigious names, as Martin Puryear and Gordon Matta-Clark have exhibited there, and Kerry James Marshall taught there. 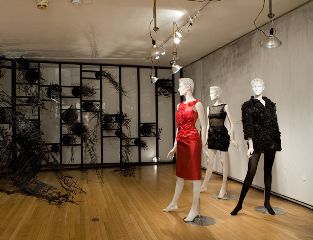 from the exhibition “Dimensional Lines,” 2011

“Almost everyone on the North Shore,” says Diedrich, “has had some connection to this art center. Parents or children went here, peers exhibited here. A huge number of people have been through this place in one way or another.”

A fresh study conducted by the Evanston Community Foundation reveals that people in the surrounding communities do want a vibrant art center. In the next few weeks a proposal titled “Roadmap for the Arts in Evanston” will be presented.

The EAC was founded at the start of the Great Depression in 1929. Diedrich pulled a 1944 newspaper clipping and read a line from then-director Katherine Lord: “In this time of unrest it behooves us all to develop the things of the spirit, and to work with all our hearts to build up that which neither wars nor depressions can take from us.”

No matter the year, an art center’s existence depends on the ability to lead its constituents with confidence into the unknown.