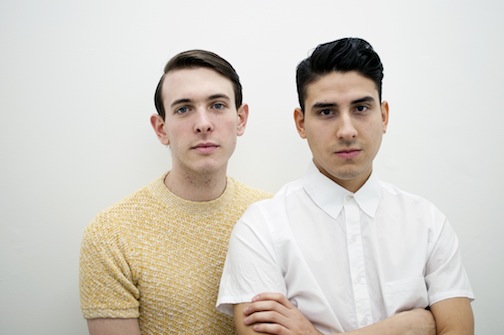 The name of Pilsen’s newest apartment gallery, Queer Thoughts, originated from its acronym rather than the other way around. Gallery directors Sam Lipp and Luis Miguel Bendaña dubbed it QT because the modest third-floor showroom off 18th Street is, well, cute. About the size of a walk-in closet, the room has pristine white walls and bright white fluorescents. A nearby closet functions as a video-screening room for the current exhibition by Thomas Schleinstein, a New York-based artist whose video shows hazy, unintelligible activity filmed through an ice cube. The main gallery appears empty at first glance, but further inspection reveals white spots intermittently painted on the white wall at eye level. Schleinstein sent specific installation instructions with the work: the circles were to be equally spaced at seventy-inch intervals.

Lipp describes the gallery’s program as focused on “post-identity” artwork. Post-identity is a relatively new buzzword that implies a sense of acknowledging one’s identity, be it sexual, racial or otherwise, and then moving on. Instead of looking through the lens of identity or pushing it aside altogether, post-identity art looks above it.

“People project a lot onto the name Queer Thoughts and we like how it’s evocative but also abstract and nebulous,” remarked Lipp. “We’re interested in going back to where the word queer originated… from the odd and peculiar,” adds Bendaña.

And peculiar it is. The work being shown at QT aims to challenge and provoke a viewer’s attention. It’s queer like a small yellow snake wriggling around on the floor in a chartreuse room. Queer like smiley faces made of fire. Queer like a precious grey smudge on a white wall.

Queer Thoughts is only about seven months old, with six exhibitions under its belt, including one at New Capital as part of its 24 Hours/25 Days series. It started like many apartment galleries do, partially out of tradition and partially because, why not? Lipp and Bendaña, who are both artists, already occupied the apartment, so when they graduated from art school last spring they decided to take advantage of their new free time, paint the floors and walls, install some lights, and go for it. Their first show, a strong swoop into the art scene, featured whimsical artwork by Drew Olivo (aka Puppies Puppies). His use of hair gel and security mirrors calls to mind Damien Hirst with all of the humor and none of the ego.

“We do not view showing work that may be uncomfortable for some viewers as a necessarily negative attribute. Often the best aesthetic experiences have an element of discomfort to them,” said Lipp.

Future plans at Queer Thoughts include exhibiting some international and established artists, and keeping it going as long as they occupy the apartment. “For now it’s just a good experience to work with artists and a really exciting way to meet and network with people,” reflects Bendaña. (Kelly Reaves)