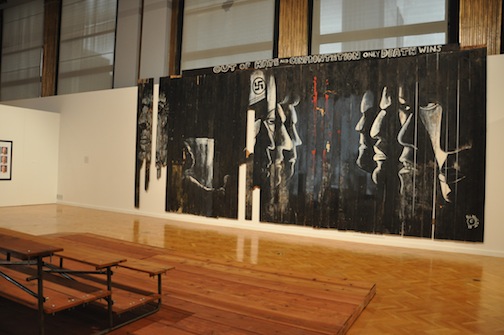 “Planting and Maintaining a Perennial Garden III,” Faheem Majeed’s contribution to the Industry of the Ordinary’s collaborative exhibition, uncovers a significant artifact of Chicago art history. Majeed presents a striking but deteriorating mural by Bill Walker from the 1960s, titled “Hate and Confrontation,” and contributes a set of bleachers made from repurposed cedar boards from which to survey the work.

Bill Walker worked from the 1960s until the eighties and has murals all over the South Side. Many have been destroyed but several have been restored. Walker was an ordinary man who worked in the post office yet did what we might call extraordinary things. He founded the Organization for Black American Culture and participated in the founding of the Chicago Public Art Group. The wall-sized graphic mural depicts a series of receding black profiles lit by the harsh light of anger, recalling representational work by Charles White, Elizabeth Catlett and Margaret Burroughs. It is a stirring, authentic expression of an African-American artist’s direct, untheorized engagement with the turmoil of race relations in Chicago, a fragment of social and overlooked aesthetic history, which does not seem at all ordinary.

Now, the displaced mural, showcased in a downtown setting, brings to light the prodigious efforts of Majeed and others to expose greater audiences to this history. “Planting and Maintaining a Perennial Garden” is the third manifestation of a project that emerged from Majeed’s tenure as executive director of the South Side Community Art Center. Majeed borrows the title of his series of installations from an article written about the history of the SSCAC by Anna Tyler for the International Review of African American Art in 1994. The cedar boards Majeed uses evoke the walls of the Margaret Burroughs Gallery designed specifically (one proposal was from Nathan Lerner) to meld the international ideals of Bauhaus design with local ideals of what we now call “community outreach.” One of 110 Community Arts Centers initiated by the WPA, the Bronzeville center went into decline during the Red Scare, and was affected by fluctuations in arts funding but was revived during the 1960s when Walker’s mural was painted. It is a powerful and moving mural that seems to have fallen into disrepair. (Janina Ciezadlo)

Through January 19 at the Chicago Cultural Center, 78 East Washington.

Nice, Janina, but it includes some misinformation about Mr. Walker’s life and work (1927-2011). A report states that the mural was titled “Confrontation.” It was done in 1973, and had been installed on Michigan Ave. south of 39th St., on the boarded-up window of a (now razed) car sales agency. Some years later, probably the late 1970s, the mural–which had another section–was removed by the SSCAC and placed in storage there–until Faheem “rescued” it. Records indicate that Walker worked for the downtown post office in 1945; he then enlisted in the service before earning a degree at an art school… Read more »

Hello Jeff: In my defense I took the title from the wall text at the Cultural Center, but if I had been thinking clearly I would have run it all by you before I posted anything. Thank you for the corrections and the additional information.

Jeff, thank you for correcting details about Bill Walker. It is so important that the documentation be correct when referencing actual people. My other thought was to add some information about Anna. Anna M. Tyler (her maiden name is McCullough)was a visual artist who collected documentation and personally witnessed substantial amounts of art history, specifically about Chicago, but nationally, too. In Chicago she worked with Margaret Burroughs on projects from the Lake Meadows Art Fair to projects at the SSCAC and the DuSable Museum. She and her husband, Al, studied in Mexico (and the Chicago Art Institute) and were close… Read more »