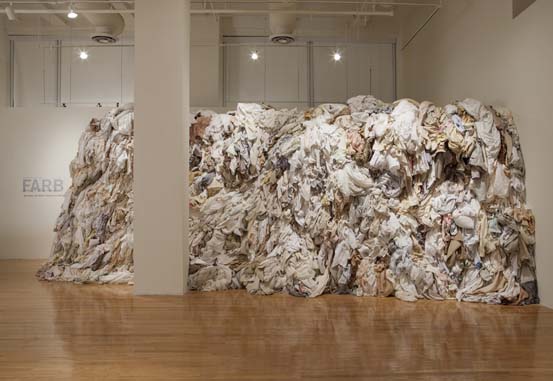 The smell is unavoidable, and it’s distinct: a brew of dust, armpits and dried urine. Strangers’ old clothes just smell that way, especially when they come from a thrift shop like the Salvation Army. Artist Heather Mekkelson compiled hundreds of these used, pale-colored garments to build a retaining wall nearly ten-feet high and twenty wide, referencing a mass grave but also death’s wholesale opportunism: everyone must go.

After it dries, a portrait painting in a museum has no scent at all, but the stink of secondhand clothes is difficult to ignore. Here, the clothes are a reminder that history is like food: it constantly needs to be freshly killed or else it is no good. The stench of Mekkelson’s artwork is a convincing theatrical stand-in for the stench of rotting corpses in “Embracing the Farb: Modes of Reenactment,” a group exhibition that’s populated with new ideas about death and how people die, from lynching to old age.

It’s not just artists who have the keen skills needed to re-imagine historical facts; educators and scholars and journalists—even observers—keep the clay ball of history wet with the labor of their sweaty hands. Everyone must keep pressing and passing this clay thing we call history. Otherwise, it dries out and falls apart. “Embracing the Farb” was convened to keep that ball rolling, but also to breed the dust bunnies of history. The more that historical “facts” get multiplied, the better we can see and understand them. This isn’t simply a symptom of our age of creative nonfiction, but a necessity of being a curious, engaged citizen.

Although historical revisionism has been a useful (if trendy) academic strategy for some four or so decades—reasserting the roles of women, minority races and classes and sexualities within a broader context of world history—it’s fine to be reminded that this powerful tool exists. “Embracing the Farb,” curated by Julie Rudder, is one of two current local exhibitions intended to provoke conventional modes of storytelling. In Evanston, a large survey of artwork by Terry Adkins, titled “Recital,” presents many evocative sculptures that address and redress the lore of African American culture. Both exhibitions foreground the texture of relics, rather than basic texts, to tell their stories, resulting in complicated, open-ended object lessons and refreshingly humanist perspectives on human history. 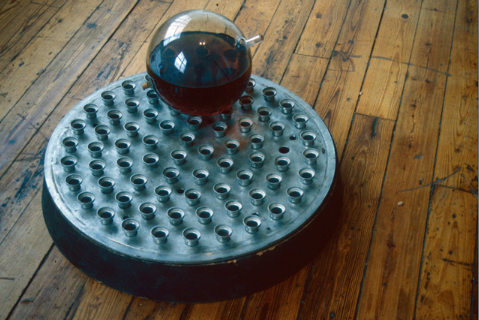 Adkins, a Philadelphia-based teacher and artist, is perhaps too under-known in the art world, but his career survey—thirty years’ worth of ambitious artwork—moves him to the front of important discussions about culture in America. Adkins balances storytelling, folklore and secret and conventional histories in his artworks, most of which directly reference an historical figure, from Beethoven to Jimi Hendrix, but tap their legacies using abstract means, almost to the point of obfuscation. Adkins isn’t necessarily revitalizing lost histories that have been stuck in time; the cosmos of symbols employed by Adkins move his stories into the realm of magic realism, surrealism, mysticism—anything but straightforward narrative. It’s an effective tactic, because humans are inspired by a range of evocative objects and symbols, and Adkins trusts that his viewers—or, “beholders,” a term he prefers—have complex, sensate minds and enjoy the experience of piecing together history. It’s a tall order to ask of viewers, but staged in the academic art museum of Northwestern University, the task is a perfectly alluring challenge.

Whereas the overtones of “Recital” are monumentally serious, the high points of “Embracing the Farb” are several humorous artworks. A video compilation by Lori Felker and photos by Steve Nyktas work the same game as Adkins’ artworks, just with more playfulness. Felker and Nyktas’ artworks are wonderfully stimulating, and better viewed in person than explained here. Adkins, Felker and Nyktas, as well as Mekkelson, are working toward a reworking of history eloquently defined by Thomas Carlyle: it is “the essence of innumerable biographies.” 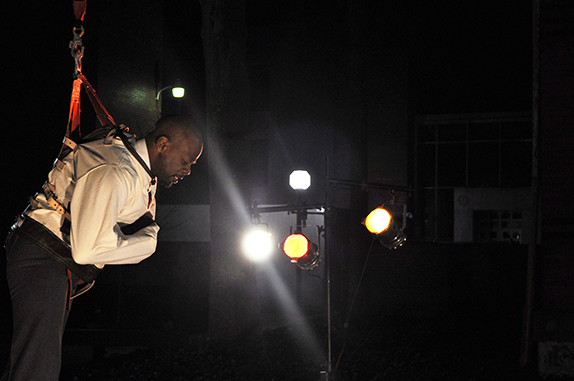 A video work by Jefferson Pinder that conflates a lynching with a Houdini stunt, in “Embracing the Farb,” illuminates, by contrast, why Terry Adkins’ work is so effective. Whereas Pinder is heavy-handed with his references, Adkins is freeform, and just subtle enough to be enticing. As with the sculptures of Martin Puryear and the paintings of McArthur Binion, Adkins’ artwork awakens our innate yearning for wonder on the basic level of shape, material, texture and color. Some viewers may prefer to quench their thirst with Theaster Gates’ facile race-riot hose sculptures or Pinder’s melodrama, but those may not be the artworks that stand the test of time.