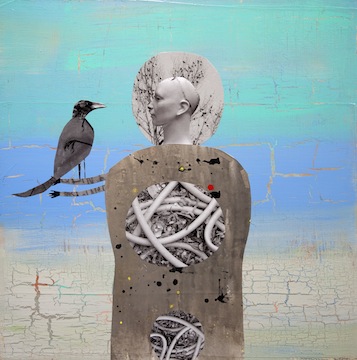 One of the most important postmodern photographers, who from the beginning painted on base photographic images to depict mythical and existential themes, Holly Roberts has now reached the point at which her expressive imagination almost fully dominates any traces of realistic representation. Always mordant and cutting in constructing her take on existence, Roberts has achieved a more intense level of focus in her latest series, which sets up complex relations between the crow (a raptor), the coyote (a predator) and the human form—all of which populate the land and folklore of her beloved American Southwest. In her most lacerating images, Roberts gives us human-like shapes, whose insides are visible, as if the skin had been carved out or x-rayed, revealing, in one instance, tangles of tree limbs lying on a bed of leaves that substitute for the viscera that we would expect to see. To augment the effect, a crow faces the sculpted head of a figure, as the two engage in a staring match. Yes, there is a unity of nature in Roberts’ iconography, but it is at the antipodes from new age. (Michael Weinstein)