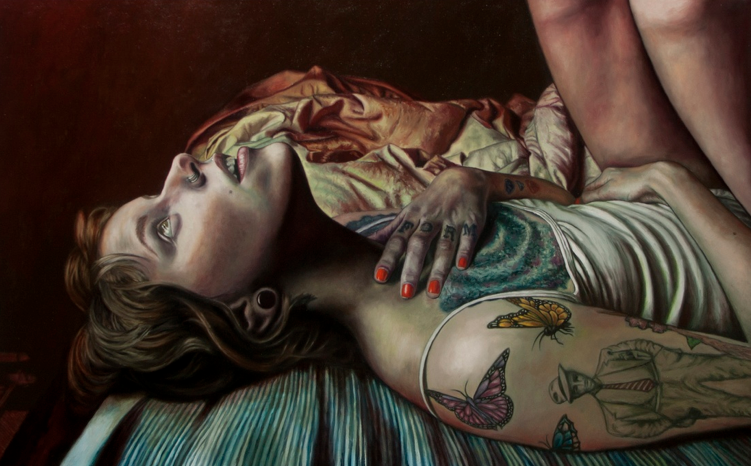 Trained in classical guitar before teaching himself oil painting, Ian Reynold apparently has an affinity for creative forms that trade heavy in meticulousness. His oil-on-linen paintings in the exhibition “Skin and Bones” embody the term photo-realistic, from the accurate capturing of light and the intricacies and idiosyncrasies of the portraits to their texture, applied smoothly and evenly to the surface as if willed there or chemically developed. A feeling of dissociation runs through the works; Reynold’s subjects appear to be looking at us from the bottom of a k-hole, captured in various provocative and vulnerable positions. Standouts “Samantha Lying” and “Samantha” turn conventional poses on their heads. From clothed to topless, the model looks at turns susceptible and in control behind canary-lidded sanguine eyes.

Reynold’s models are canvases in and of themselves, living people replete with piercings and tattoos, brilliant makeup and byzantine jewelry, and the attention paid to their surroundings limits the sense that one is looking at a painting, fostering the feeling that one is looking in on a scene of fully realized beings. Reynold describes his work as “realism with surreal undertones,” and the surreality is in no small part due to the curious effect of his audience being reflected so eerily back at themselves. (B. David Zarley)