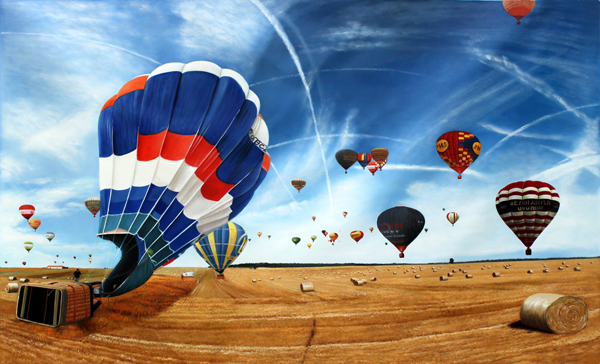 “A Place of Execution”

If the November elections had turned out differently, Shay Kun’s new paintings would have belonged in the White House. The design and execution are flawless, as befits a presidential setting. But more than that, the vision of magnificent hot-air balloons floating above a hyper-Romantic Hudson River School landscape looks like an über-rich wet dream, conflating idealistic American history with personal ambition. Isn’t that how Malcolm Forbes related to his Fortune 500 clients? Captains of finance lofted above the workaday world in colorful, Victorian splendor, while far below the earthbound wage earners scurry about like ants on the concrete. But actually, just about everybody would like to float “up, up and away,” including this Israeli artist’s parents, both of whom narrowly escaped the Holocaust in Hungary and once gave their son a wooden airship to play with as a child. It’s escapism, pure and simple, and who doesn’t occasionally need it? What’s special about Kun’s balloon adventures are that they’re so well done, they’re magical. As one of the titles, “Styles of Radical Will,” might suggest, they’re not intended to be mindless. Another title warns us that “All My Friends Are Going To Be Strangers,” and since its boldly colored balloons soar among the urban cliffs of East Wacker Drive, it hits close to home. The New York-based artist has struck a balance. On the one hand, like his artist-survivor-mother, he really needs to paint pretty pictures. But on the other hand, like his artist-survivor-father, he feels that our civilization is deeply flawed. Somehow, the son of these two commercially successful artists has avoided being too saccharine, maudlin, or creepy. Nor is he preachy, as in his earlier work that slapped your face with an environmental message. This series of paintings takes you up for a very pleasant ride.  If you want to feel guilty about it, that’s up to you. (Chris Miller)